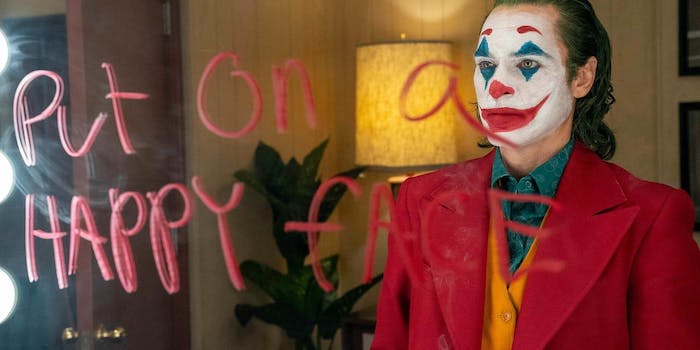 ‘Joker’ isn’t as smart as it thinks it is

Joaquin Phoenix gives a stunning performance at the heart of a rather derivative movie.

This review includes some spoilers.

Joker adopts a paint-by-numbers approach to making a “serious” comic book movie, drawing directly from Martin Scorsese’s Taxi Driver and The King of Comedy. Instead of portraying the Joker as a sadistic prankster with a perverse sense of humor, director/co-writer Todd Phillips reimagines him as a tragic figure who struggles with mental illness, plagued by relatable socio-economic problems in a harsh, unforgiving city.

Phillips was keen to find realistic explanations for the Joker’s appearance and behavior, abandoning the old origin story of a man falling into a vat of chemicals like Jack Nicholson in Tim Burton’s Batman. Differing from Heath Ledger’s chaotic terrorist or Mark Hamill’s rascally megalomaniac, Joker’s Arthur Fleck (Joaquin Phoenix) is a professional clown who becomes a garden-variety serial murderer. His constant, inappropriate laughter is the result of a neurological condition, and his motives are easy to parse. He’s also uninterested in pranks or tricks, echoing Batman’s evolution from caped crusader to a grim-faced Ben Affleck branding his logo into criminals’ skin.

Always eager to make himself repulsive on-screen, Joaquin Phoenix gives a hypnotizingly creepy performance, equal to his work in The Master. But as the story wore on, I kept remembering Phillips’ admission that he used the Joker brand to sneak a “real movie” into the studio system, where original films are increasingly hard to fund. This background shines through because Joker’s gritty psychodrama side clashes with its role as a DC Comics origin story. Starting as a powerfully unsettling character study, it builds to the kind of corny and obvious finale you’d expect from, yes, a studio superhero movie. If we’re going to talk about thematically mature superhero films, Logan had a better script, and Black Panther’s politics are more sophisticated. 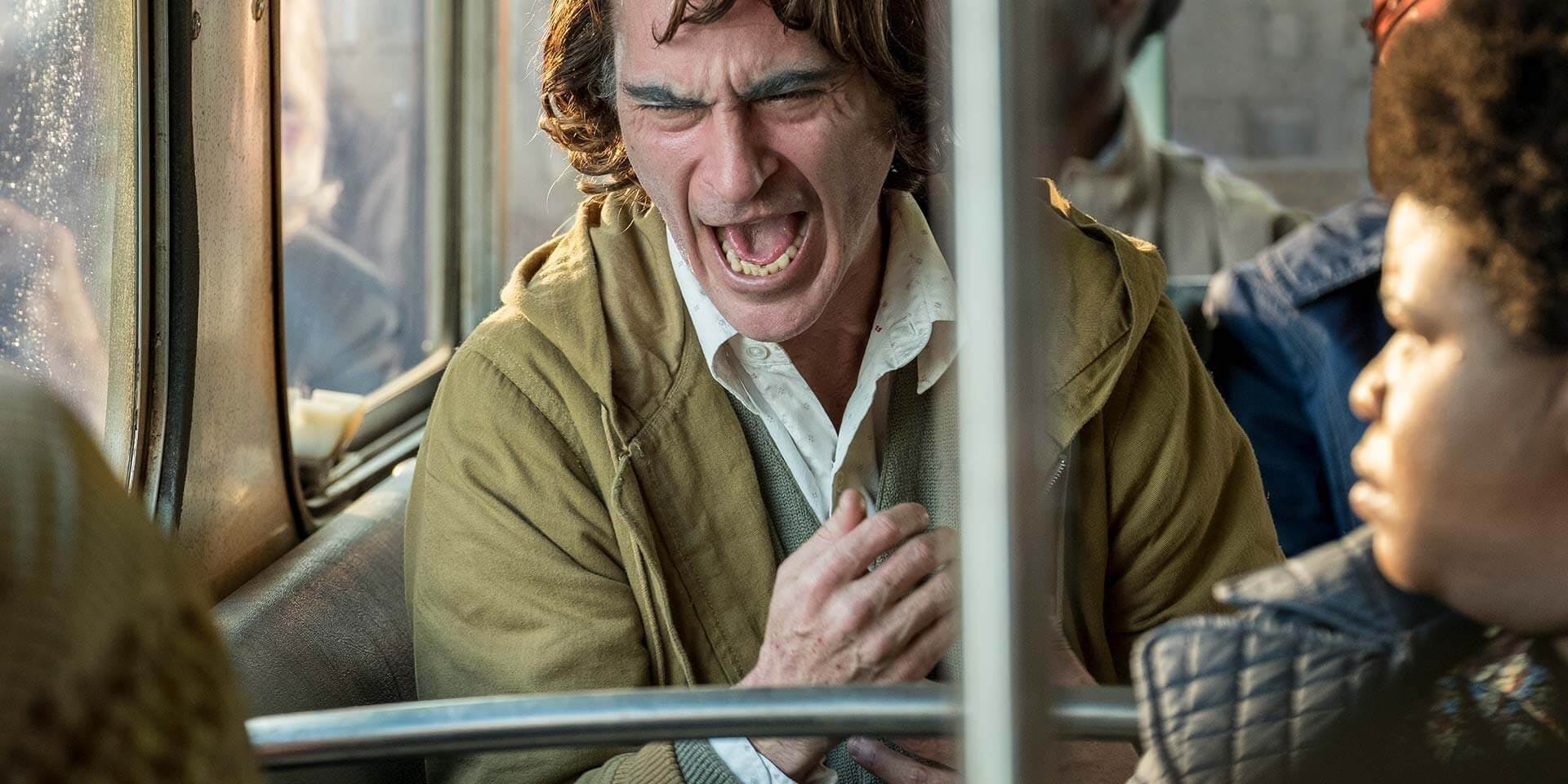 Modeled on 1970s crime wave-era NYC, Joker’s Gotham City is a gorgeous visual accomplishment. Grainy cinematography and a vintage color scheme give the impression of a film made 40 or 50 years ago, and the costumes (Mark Bridges) avoid the obvious retro choices you often see in period pieces. It’s a perfect fit for the chaos and grime of Gotham. Unlike the gleaming metropolis of the Christopher Nolan movies, this city really does feel like somewhere that would spawn the Joker and Batman.

Usually viewed through a misty haze of Bruce Wayne’s childhood nostalgia, Joker’s version of Thomas Wayne (Brett Cullen) is more obnoxious. He’s a Reaganesque mayoral candidate who wants to “save” Gotham, but he blames working-class rioters for their own misfortune. Arthur’s elderly mother Penny (Frances Conroy) writes unanswered letters begging Wayne for help, while Arthur aims his attention at a different celebrity idol: late-night talk show host Murray Franklin, played by Robert De Niro. It feels a little unfair to accuse a superhero adaptation of being derivative, but this set-up is identical to The King of Comedy. In that film, De Niro played the wannabe comedian Rupert Pupkin, who idolized a late-night talk show host played by Jerry Lewis. Both Pupkin and Fleck fantasize about going on TV, and stalk attractive Black women in their neighborhoods (Joker’s is played by Zazie Beetz, in a very minimal role). 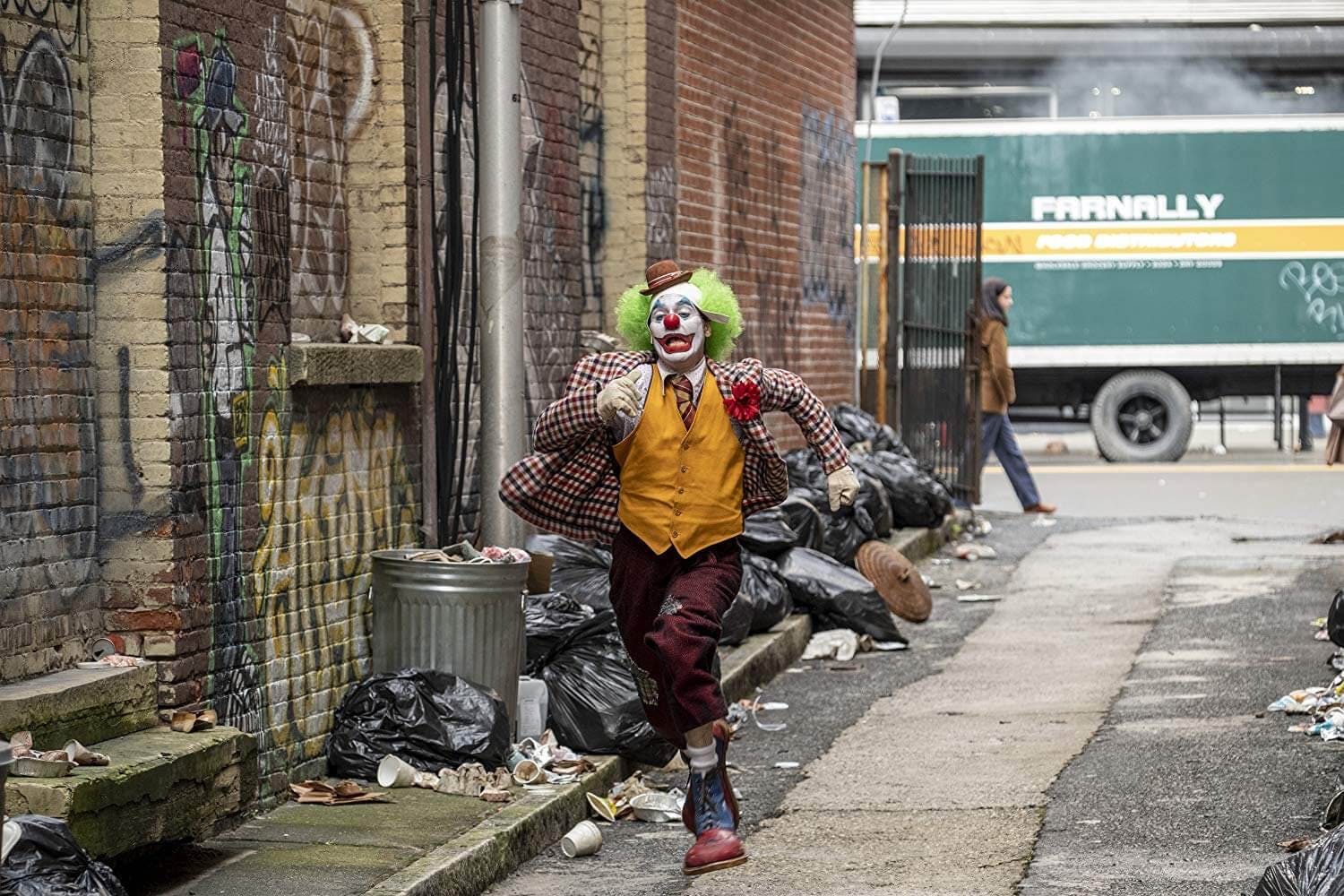 Both movies culminate in violence, and both characters attract a kind of public following. Arthur Fleck is like a strange cross between Tommy Wiseau (whose extreme weirdness provokes fascination) and Bernard Goetz, a vigilante who shot four Black teens on the New York subway in 1984. While Goetz sparked a conversation about crime and racism, Joker’s inciting moment of violence is all about economic inequality.

Without going into detailed spoilers, Arthur Fleck’s first victims are rich; a crime that’s interpreted by the media as the first volley in a class war. He becomes the unlikely face of a social movement, inspiring people to don clown masks and take to the streets. Thus begins a riot that paints movements like Occupy Wall Street as one-note thugs. On an individual level, Joker is great at portraying the tiny moments of pain caused by welfare cuts and an uncaring society. But on a macro scale, Joker’s politics are childishly cynical about activism, and no more complex than your average Batman film’s view of capitalism.

After all the political backlash to this movie, I was surprised by a more subtle problem: Joker really buys into the old idea of queer-coded villainhood. This is a long-running trope in everything from Disney cartoons to Bond movies, and it’s different from actually portraying a character as gay. We know Arthur Fleck is attracted to women, illustrated by him stalking his neighbor. But subtextually, the film draws clear connections between his mental illness, his violent behavior, and his inability to perform traditional masculinity. 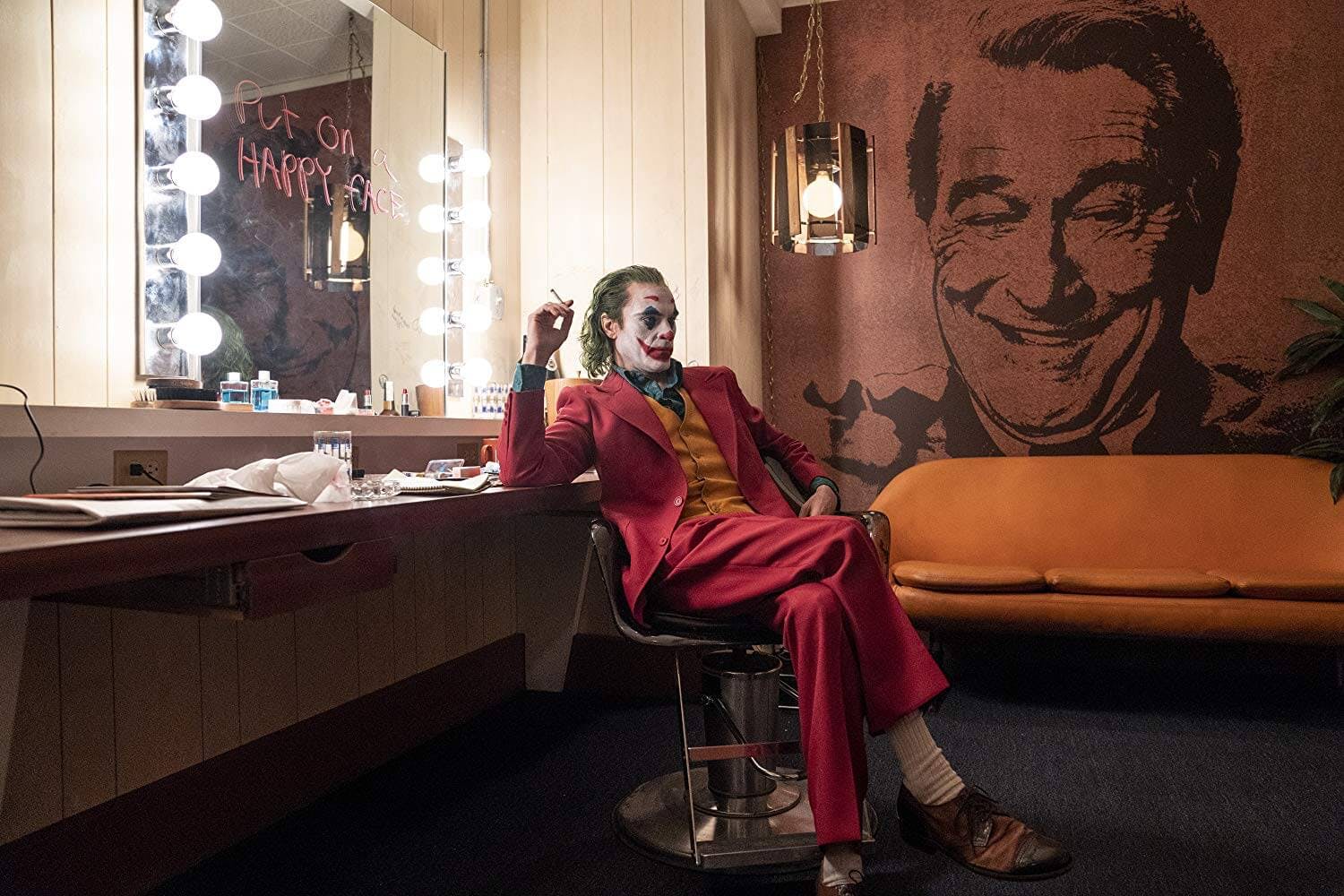 As a flamboyant figure who seeks to destroy Batman’s macho heroism, the Joker has a long history of queer coding. Phoenix’s version is a blatant example. There are numerous scenes where he gazes into mirrors while applying makeup, contrasting with other clowns who are portrayed as regular Joes, rarely wearing greasepaint on-screen. He has a close relationship with his mother (an old favorite in the queer-coding playbook, harking back to Psycho), and fixates on the handsome, confident Murray Franklin as a father figure and imaginary friend. In private moments we see him dance gracefully and experiment with his appearance, portrayed as freakish yet oddly delicate. His slim figure, long hair and bright clothing offer a clear contrast with Cullen and De Niro’s grey suit-wearing patriarchs. And when Fleck finally embraces the Joker persona, his big monologue sounds almost camp. It’s one of the main ways he differs from De Niro’s characters in Taxi Driver and The King of Comedy, adding a subtly homophobic edge to a film that doesn’t actually feature any gay characters.

People who saw Joker at early festival screenings had a very different experience to the audiences watching it on opening night. At the Venice Film Festival, a jury of art cinema insiders awarded it the Golden Lion, placing Joker alongside Roma and Brokeback Mountain. They embraced it on the terms its director wanted, treating it as a “real movie,” probably without intimate knowledge of the lead character’s fandom and political baggage. But in the wider pop-culture context of 4chan, incels and mass shooting threats, Joker has a more complicated impact than an indie drama with similar themes.

Following hard questions about Joker’s potential to inspire real-life violence, Warner Bros. canceled all press interviews at the premiere. We now face a new twist on the debate about separating art from artist. Can we separate Joker’s artistic quality from the character’s toxic baggage? Do we actually need another movie sympathizing with a violent, isolated white man? It is unfair to judge Joker purely on those terms? The strangest part of this whole controversy is that Warner Bros. was seemingly unprepared for it, when this was always a depressingly predictable outcome.

We can easily clear up one part of this debate, however: Joker doesn’t portray its protagonist in a positive light. It’s certainly sympathetic, in the sense that we feel the visceral awkwardness and pain of his isolation. He tries and fails to understand social cues that most people follow instinctively. At the same time, the film repeatedly highlights how Arthur makes women feel uncomfortable, and how easily he slides into violence. Some of the extended close-ups of Phoenix’s face are almost too uncomfortable to watch. It’s the least glamorous, least charming depiction of the Joker we’ve ever seen, and the violent moments are grimy and unpleasant. There’s no Tarantino-esque flashiness here. For all that we might feel bad for Arthur Fleck at first, this film isn’t ambiguous in its moral message. However, I still think the two sides of the “is Joker irresponsible?” debate are arguing at cross-purposes.

While Phoenix, Phillips, and co-writer Scott Silver didn’t plan to glorify the Joker, the story structure does exactly that. Joker is a power fantasy for the kind of person who has Arthur Fleck’s emotional problems and delusions of grandeur. At the start, he’s miserable, downtrodden, and overlooked by the world. By the end he’s a celebrity villain, sparking a violent uprising of people who copy the hair and makeup that previously made him a target for bullying. He’s also embraced his true identity as a dangerous, misunderstood outsider. Joker takes the themes and imagery of two classic Scorsese movies and tacks them over the simple struggle-and-victory arc of a superhero story.

The question of whether the Joker is portrayed as admirable (which he isn’t) is immaterial. He’s portrayed as successful and notorious, which is generally the end goal for copycat killers. It’s honestly unbelievable that Joker’s creative team didn’t take this into account, especially considering the character’s existing status as the edgy, violent king of the trolls. So while Joker has plenty to offer —especially in terms of Joaquin Phoenix’s performance—this oversight makes it less thematically coherent than plenty of straightforward superhero blockbusters.