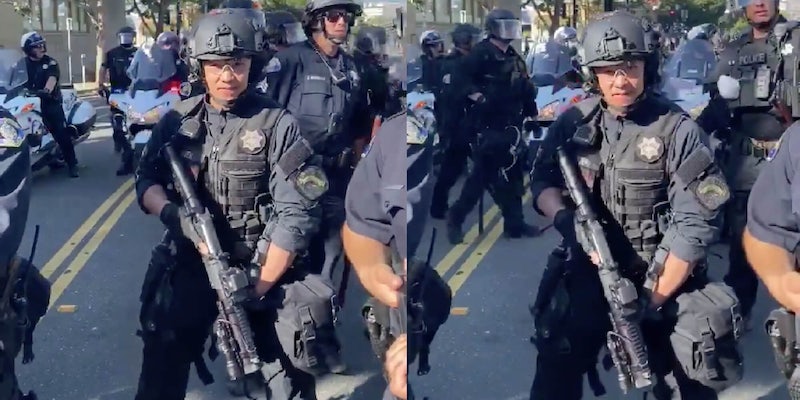 In the footage, Jared Yuen has a smirk on his face, licks his lips, and bounces around from side to side. At one point, he tells a female protester, 'Shut up, b*tch.'

A police officer over the weekend went viral on social media for looking eager to fight with protesters. Now, there’s a petition calling for his termination.

In the multiple videos of the officer, who has been identified as Jared Yuen of the San Jose Police Department (SJPD), he can be seen standing in a police line holding a projectile launcher. In the footage, Yuen has a smirk on his face, licks his lips, and bounces around from side to side. The cop was waiting “in excitement, like its a game,” as one redditor put it.

Protesters noticed his demeanor in real-time, as they can be heard saying, “This is funny to them. They have smiles on their faces. … They’re having a blast out here.”

In one of the videos, a female protester is shouting at the officers.

“Shut up, bitch,” Yuen yells back at her.

A male protester then screams, “Fuck you,” prompting Yuen to point his projectile launcher at him and fire. One redditor said the protester appeared to “hurt his ego.” The officers storm the crowd before the video ends. The protest appeared to be peaceful until that moment.

In another video, Yuen can be seen yelling to his fellow officers, “Let’s get this motherfucker.”

The petition, titled “Fire Jared Yuen #4362” and addressed to the SJPD, has been signed by nearly 80,000 people. In it, the petition’s creator says Yuen was “eager to stir chaos in the face of peaceful protestors.”

SJPD Chief Eddie Garcia had to issue an apology himself on Tuesday after saying that Yuen is “a good kid who made a mistake who let his emotions get the better of him.” The petition fired back at Garcia’s initial statement on Yuen.

“Jared Yuen is not a ‘kid’ – he is a 33 year old man who makes $200K in income paid by taxpayers. He also did not make one mistake, as protestors caught at least 3 different videos of him,” the petition reads.

Officers with departments across the nation are under fire for appearing to escalate—and in some cases, incite—violent protests.

“Police officers are supposedly trained to deescalate situations and properly control their emotions,” the petition reads. “We, the taxpayers and American citizens, demand that the San Jose Police Department investigate the numerous citations against Jared Yuen and critically examine his role in erupting peaceful protests into violence.”

According to the Los Angeles Times, Yuen was put on leave Friday and is under internal investigation for possible misconduct. He has been with the force for six years.

The Daily Dot has reached out to the San Jose Police Department.