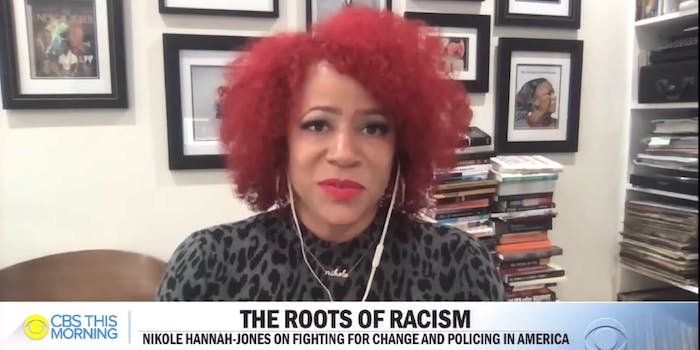 'I'm not really worried about anyone doing anything to me, but if anything ever happened to my mom, I wouldn't be able to live with that.'

Hannah-Jones says the conservative news publication is inciting its readers with a headline that she says misrepresents her views on the looting and violent protests, which erupted in the wake of George Floyd’s death.

“Despite numerous comments by people asking to post my address or burn or destroy my house, the Daily Caller is encouraging this by repeatedly reposting this story that falsely claims I am defending looting and actual violence,” she wrote.

“This tactic is an attempt to silence black journalists and I will not cower,” the writer added in a follow-up tweet.

Hannah-Jones is the creator of Pulitzer Prize-winning “The 1619 Project,” a project developed by the New York Times, aimed at reassessing the legacy of slavery in the United States.

The project has frequently incensed conservatives for its framing of America’s past.

The Daily Caller article in question highlights parts of an interview Hannah-Jones did with CBS News Tuesday, where she expressed her views on the destruction of property during the widespread protests that have rocked cities all across America. It’s titled “New York Times Writer Claims Property Destruction Is ‘Not Violence.’”

“Destroying property which can be replaced is not violence,” the journalist reportedly said. “I think any reasonable person would say we shouldn’t be destroying other people’s property. But these are not reasonable times.”

In response to the article, some Daily Caller readers demanded the publication publish Hannah-Jones’ home address and even threatened to burn down her house.

“Maybe she should publish her address. She could write a nice story after her home is destroyed,” user @barryyoung96 tweeted.

Those enraged by her comments even flooded Hannah-Jones’ email with messages containing racial slurs and threats. She shared screenshots of some of the disturbing messages she’s been receiving with the Daily Dot.

Despite the graphic messages, the Pulitzer Prize-winning writer does not believe she is in serious danger. Still, she is concerned about threats made against her family.

“I’m not really worried about anyone doing anything to me, but if anything ever happened to my mom, I wouldn’t be able to live with that,” she said.

Many have criticized the conservative publication for misrepresenting the writer’s words and stoking racial flames—in an already tension-filled time.

“This is a total distortion of what she actually said and your fake headline is actually inciting violence,” author and chess champion Jennifer Shahade tweeted, along with an angry face emoji.

However, some continued to defend the headline.

“The full video is in the article. There is zero distortion and quoting her exact words is not inciting violence,” user @hopfreq argued.

Geoffrey Ingersoll, the Daily Caller’s editor, told the Daily Dot that the while he condemns the targeted harassment and racist comments aimed at Hannah-Jones, it is her words—not the article—that is the cause of the backlash.

He pointed to a tweet by CBS that contained her full interview in which she also received threatening comments from viewers.

“Does Hannah-Jones accuse CBS News of inciting hatred? He wrote in an email to the Daily Dot. “Of course not.”

Hannah-Jones told the Daily Dot that Ingersol reached out and offered to clarify her position by adding her comments on the article, but only if she agreed to outright denounce looting and/or the destruction of businesses.

She declined the publication’s offer, calling its editor “disgusting.”

“You are not going to tell me what I need to say in order for you to accurately portray my words,” she said.

“I wholeheartedly do not agree with people harassing/targeting journalists, or anyone for that matter. But truthfully reporting on what powerful people say, that I will not stop doing,” he tweeted.