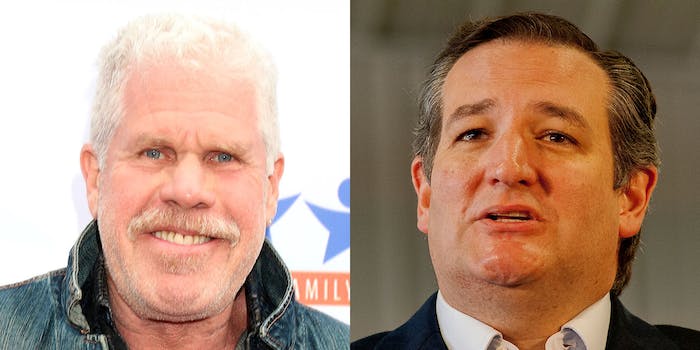 Ted Cruz won’t wrestle Ron Perlman, wants another congressman to do it for him

On Saturday, Perlman roasted President Donald Trump and Rep. Matt Gaetz (R-Fla.), the latter of whom bloviated on Twitter last week about U.S. Soccer repealing Policy 604-1, which required players to stand during the National Anthem.

“The US Soccer team called and you guessed it… said they couldn’t give any less of a fuck about what you two dipshits think,” Perlman tweeted.

Gaetz took the bait, responding, “This racial justice warrior had no problem in Hollywood portraying the White Supremacist leader of a motorcycle gang. #SOA,” referring to Perlman’s Sons of Anarchy character Clay Morrow.

Perlman fired back: “Yessir, so true! So rewarding playing assholes on tv. Tell me sir, how is it actually being one?”

The two traded barbs for a while longer, and at one point, Perlman tweeted a photo of former collegiate wrestler and Rep. Jim Jordan (R-Ohio), telling Gaetz, “If it weren’t for him you’d be the ugliest politician walking.”

Gaetz decided to employ some backup. Unfortunately for him, that backup came in the form of Sen. Ted Cruz (R-Texas), who called Perlman’s strength into question.

“Listen Hellboy. You talk good game when you’ve got Hollywood makeup & stuntmen,” Cruz tweeted. “But I’ll bet $10k—to the nonpolitical charity of your choice—that you couldn’t last 5 min in the wrestling ring w/ @Jim_Jordan w/o getting pinned. You up for it? Or does your publicist say too risky?”

For all of his bluster, Cruz had apparently forgotten all the times Trump publicly debased him during the 2016 presidential election. But Perlman sure didn’t.

“Wait, is this THEE Ted Cruz?” he tweeted. “Holy shit man! Is this the same guy let little Donnie call his wife A dog and his father an assassin and now kisses his ass? Yo, can I get your autograph man?”

Perlman also brushed off Jordan (with a dig at his dubious past) and set his sights squarely on Cruz: “I tell you what teddy boy, since mentioning jim jordan and wrestling is… problematic, why don’t we say fuck him and just make it you & me. I’ll give 50k to Black Lives Matter and you can keep all the tax payer money you were thinking of spending.”

Cruz responded on Monday morning, his expert deflection skills still intact: “I get it, you’re rich. But, apparently, soft. You sure seem scared to wrestle Jordan (whom you keep insulting). Can’t take the heat? Need to get a manicure?”

Cruz’s apprehension is unsurprising. Not only does Perlman cut an intimidating figure at 6’1”, but if Cruz were to accept, he’d have the entire American Taliban rooting against him.