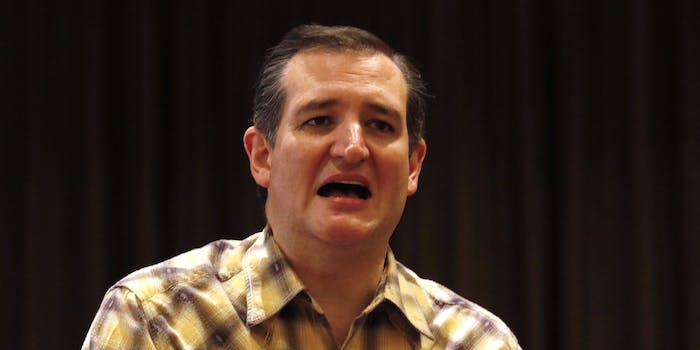 Cruz isn't too fond of Americans taking down statues.

U.S. Sen. Ted Cruz (R-Texas) minced no words when addressing the protesters who yanked down a Christopher Columbus statue in Minnesota on Wednesday.

Destroying statues of genocidal slave owners and rapists has become a national pastime over the past two weeks, as people have gathered in the thousands to protest the death of George Floyd, the unarmed Black man who was killed by Minneapolis police officer Derek Chauvin. In the last week alone, protesters in Richmond, Virginia knocked down a statue of Confederate Gen. Williams Carter Wickham, and Boston residents beheaded a different Columbus statue.

So when protesters mobilized outside the Minnesota State Capitol to topple their own statue of Columbus—whose reputation as an explorer belies the fact that he pioneered the Atlantic slave trade and committed Native American genocide—they were simply following precedent.

That didn’t sit well with Cruz. The previous presidential candidate limited his message for protesters to a two-word tweet: “American Taliban.”

It’s possible that Cruz was referencing the Taliban’s destruction in 2001 of the Buddhas of Bamiyan, two monumental statues over 100 feet tall. If, however, he was referring to the Taliban’s documented history of massacre campaigns, human trafficking, or extreme oppression of women, then their connection to the anti-Columbus protesters is unclear. Cruz also made no mention of the anti-lockdown protests that broke out across the nation in April, which, unlike recent Columbus-centric protests, were actually armed.

“Senator @tedcruz is demonstrating exactly what I mean when I say the USA does not have a common memory,” @wirelesshogan wrote. “What white Americans celebrate and honor as ‘discovery’ was literally experienced by Native nations as genocide.”