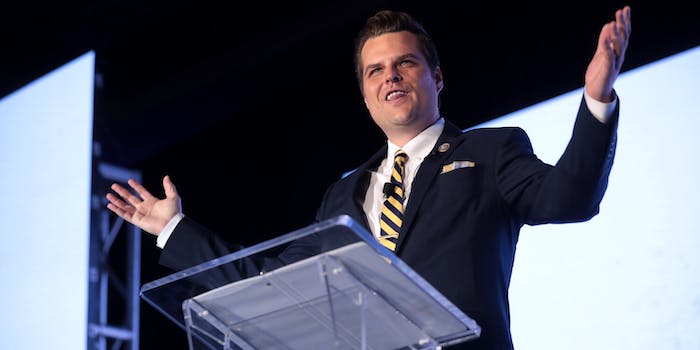 Matt Gaetz thinks he has discovered the new headquarters of antifa

Rep. Matt Gaetz (R-Fla.) might be on to something.

The Florida Republican told Sean Hannity Wednesday that he had discovered the whereabouts of antifa’s new headquarters. According to Gaetz, the organized brigade of abolitionist super soldiers has adopted Seattle as its new home base.

Seattle, as you may recall if you took elementary geography, is located in Washington, which is located in the United States. But Gaetz challenged that conventional wisdom while airing his grievances with the new woke agenda during his Hannity appearance.

“Defund the police, abolish ICE, disarm Americans, and then surrender our cities to the antifa mob?” he asked incredulously. “If this is the rulebook for the new Woketopia, count me out.”

“Antifa has now designated Seattle their capital and it’s gonna be bad for the citizens there,” he continued. “What we need to do is focus on supporting the good police, isolating and removing the bad police. And I’m hopeful, Sean, that we can actually work across party lines on this. This shouldn’t be a partisan issue. We should work on it together.”

Gaetz was referring to the antifa-affiliated activists in Seattle who recently seized control of six blocks in the Capitol Hill neighborhood, as reported by City Journal. The Seattle Police abandoned the East Precinct to protesters, who then established the neighborhood as the “Capitol Hill autonomous zone.”

Antifa is a loose and decentralized network of mainly leftist groups working to directly confront and resist the rise of fascism and racism. Activists across the board can claim antifa, but antifa itself is not a corporate entity. Its members do not meet on Wednesdays at 7 in the conference room—at least not all of them.

But that basic information—most of which is available on Wikipedia—would derail Gaetz’s new antifa theory, so he chose to conveniently ignore it on Hannity. As far as Gaetz is concerned, America has begun its headlong plunge into Woketopia, and Seattle was the first casualty.

“ANTIFA has taken over Seattle,” Kirk wrote. “They’re occupying City Hall. They created an ‘autonomous zone.’ They drove out the police. They’re extorting local businesses. And not a SINGLE Democrat has condemned this behavior. This is America’s future if Donald Trump doesn’t win in November.”

“Antifa and BLM have broken into Seattle city hall,” he tweeted. “Despite their mayor @MayorJenny being beyond progressive, they are demanding she resign since she won’t defund the Police. This is the new normal in big cities of America.”

President Donald Trump even chimed in with an extremely productive tweet: “Domestic Terrorists have taken over Seattle, run by Radical Left Democrats, of course. LAW & ORDER!”

According to Twitter user @florughh, the so-called “antifa capital” in Seattle actually looks… pretty fun? Protesters apparently set up a food co-op and a projector to watch movies. They even have a smoking section!