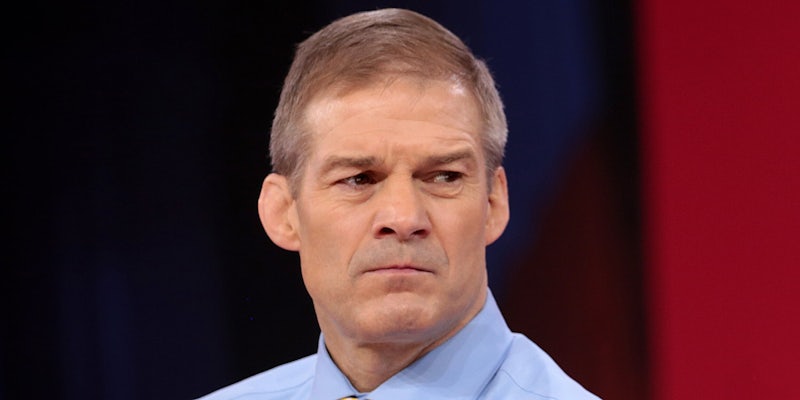 Rep. Jim Jordan (R-Ohio) is one of the fiercest supporters of President Donald Trump in Congress, launching into fiery tirades in defense of the president whenever cameras are on him.

According to a new lawsuit first reported by NBC News, a referee told Jordan that Richard Strauss, a doctor with the Ohio State athletic department, masturbated in front of a shower.

Strauss is reported to have sexually abused over 177 boys in two decades while at the school.

According to the lawsuit, when the referee told Jordan about the incident, Jordan said: “Yeah, that’s Strauss.”

The referee is now the second person to say they specifically told Jordan about abuses by Strauss. Other wrestlers have said they thought Jordan also knew but did not say they spoke to him about it.

Jordan has always vehemently denied he knew anything about it.

But given his position with the university at the time and the widespread nature of the abuse, people think that’s not true. And on Twitter, #JimJordanKnew started trending.

Because they had too few pedophila defenders on the committee #JimJordanKnew https://t.co/Qpg3XMla3V

Anything Jim Jordan has to say about the whistleblower is going to ring a little hallow coming from a man who protected a sexual predator and denied any knowledge of what was going on. He should resign now.
#JimJordanKnew#JimJordanResign

At least 2 people now confirm #JimJordanKnew of abuse at Ohio State when he was a coach there—but did nothing. At the very least, Jim Jordan needs to resign from Congress immediately. #TrumpBribed

Some drew a comparison to the recent situation of Rep. Katie Hill (R-Calif.) who resigned as a scandal about an improper relationship with a staffer came to light.

Katie Hill resigned over a consensual affair with a staffer. Bill Clinton was impeached. Jim Jordan stood by silently while tens if not hundreds of young men entrusted to his care as their coach were subjected to sexual abuse & did nothing. https://t.co/3PXMWDmrAZ

Jordan did not respond to a request for comment from NBC News last night.

David Covucci is the senior politics and technology editor at the Daily Dot, covering the nexus between Washington and Silicon Valley. His work has appeared in Vice, the Huffington Post, Jezebel, Gothamist, and other publications. He is particularly interested in hearing any tips you have. Reach out at [email protected].