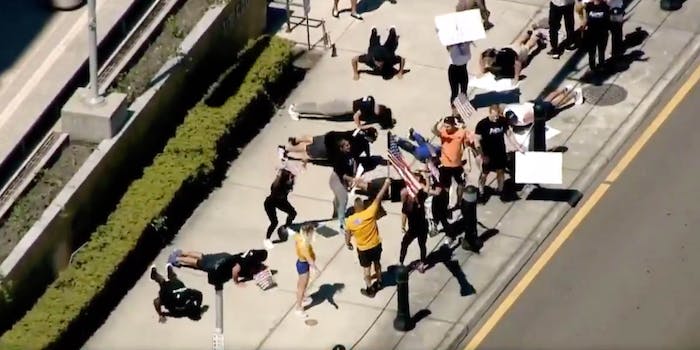 Protesters do squats and push-ups while demanding gyms reopen

Little did they know, the gym was inside of them all along.

A group of demonstrators in Florida did push-ups and squats outside of a courthouse on Monday in protest of gym closures.

The protesters, 30 or so of who gathered on the sidewalk next to the Pinellas County Courthouse in Clearwater, called for athletic facilities to reopen despite the ongoing coronavirus pandemic.

Gyms across the state have been closed since last month after Gov. Ron DeSantis (R) issued an executive order shuttering business deemed non-essential in an effort to limit the spread of COVID-19.

Although last week Florida began allowing select businesses to reopen, gyms were not among those included in the first phase of the reopening plan.

The protest, which also included American flags and signs that read “we are essential,” ended up getting roasted online.

Gym bro stereostypes and jokes flooded Twitter, with many noting that the group had ironically created a gym on the sidewalk.

“They are proving you can workout outdoors,” @mamatica007 said.

“You just know that every single one of these people is ‘that guy’ at the gym who bangs out those useless, tiny-range-of-motion chin ups and never re-racks the weights,” @summerasana said.

Some questioned the group’s dedication, arguing that just push-ups and squats are hardly sufficient for a good work out.

“Not a single burpee seen in that video,” @soneillmorris said. “They aren’t serious.”

In all fairness, doing push-ups, sit-ups, squats, and other bodyweight exercises are not going to provide the same benefit as resistance training with weights. That being said, I think we can all agree that missing out on the gym is a small sacrifice to make given the circumstances.

A small number of people did, however, appear supportive of the effort. At least one person seemed willing to show up, but not before chugging their pre-workout drink, of course.

Small protests similar to the one in Florida have popped up across the country in recent weeks.

While some prefer push-ups, others have opted to open-carrying defunct rocket launchers while ordering Subway sandwiches in protest of stay-at-home orders.