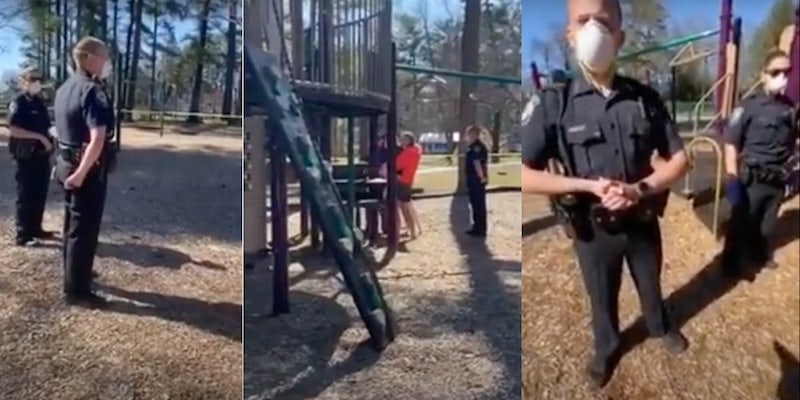 One of the protesters is a school board member, and thousands have signed a petition calling on her to step down after a video of the incident went viral.

A newly-elected school board member is receiving calls asking for her resignation after a viral video shows her and other social distance protesters disobeying New Hampshire police officers.

Nearly 5,000 people signed on to a petition asking Rochelle Kelley to step down, the New Hampshire Union Leader reports.

In the 11-minute video, adults, including Kelley, maintain it’s their constitutional right to be at the playground. Some call the officers asking them to leave “Concord Nazis.”

One man compares the enforcement of coronavirus orders to “picking up Jews and putting them in cars.” After one officer walks away, one adult in the video repeatedly coughs in his direction.

Citing the state’s stay-at-home ordinance, the playground is circled with yellow caution tape and marked with “closed” signs.

The incident occurred on April 23.

“I don’t understand why the Constitution is an opinion,” says Kelley, who filmed the confrontation. “In all seriousness, don’t you feel really sad you’re a police officer, a man of the law and you’re kicking kids off [the playground?]”

Kelley told the Union Leader she never used the term “Concord Nazi” to describe the officers. In addition, she claims to not know the people at the playground who used such rhetoric.

“I was just trying to have a conversation with them, which I now realize was stupid,” she says. She alleges she didn’t know that the adults around her were saying until she replayed the video.

“They did exactly what we would have hoped,” he said, noting that they “didn’t escalate” or “bite into any of that foolishness.” Police are looking at the coughing and considering whether to prosecute, he said.

The petition to remove Kelley, meanwhile, takes issue with her “disrespectful manner” toward law enforcement.

“Whether these actions and/or words were performed by her or in her presence, we the undersigned have lost faith in her ability to objectively, civilly, and maturely advocate for the children of Weare and its taxpayers,” the petition reads.

Kelley told the Union Leader she does not plan to resign.