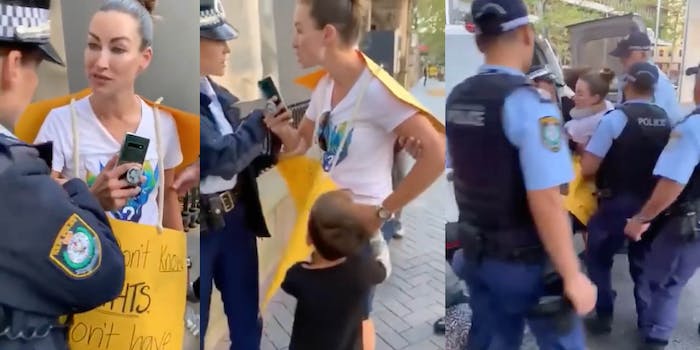 She claims her son wanted to be at the protest to demand the skate parks reopen.

A now-viral video shows an Australian anti-vaxxer getting arrested during an anti-lockdown protest she brought her child to.

The protest, dubbed “Exercise My Rights,” took place at the New South Wales parliament house on Saturday, according to the Daily Mail. Renee Altakrity, a 36-year-old mother of three, took her 4-year-old son to the protest. She later defended that decision in an interview with Daily Mail Australia by claiming he wanted to be at the protest to demand the skate parks reopen.

In the video, Altakrity can be seen with a sign around her neck, reading, “If you don’t know your rights, you don’t have any. Magna Carta.”

Police, according to the Daily Mail, claim protesters at the rally were not complying with Australia’s social distancing regulations: Australians must keep about 5-feet apart from others when being in the public for essential reasons or to exercise.

“Officers moved the group on after explaining they were not authorised to protest and were also not complying with social distancing regulations,” an NSW Police Department spokesperson told 9news. “One woman refused to give officers her details and would not comply with their direction to move on. She was placed under arrest; however, resisted and struggled with officers.”

The video, which was posted to Reddit, starts off with Altakrity holding her son’s hand as he screams and cries. She later picks him up, and he is clung to her as she resists arrest.

“I’ve done nothing wrong. … You’re scaring my son. Get away from me and my son,” Altakrity tells the officers.

Other protesters are filming the confrontation, questioning the officers, and even physically intervening.

“Mummy is not going. … Leave mummy alone,” her son tells the officers. He was ultimately pulled from her arms as she was loaded in the police van.

One protester can be heard telling the officers to “Give me the kid, please. He’ll feel safer with me.”

Altakrity later posted a video from the back of police van, according to the Daily Mail.