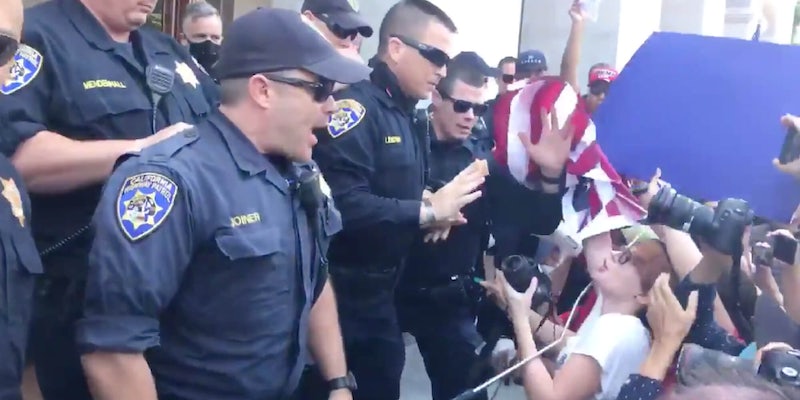 'And just like that, blue lives didn’t matter anymore.'

A video of “reopen” protesters clashing with police at a rally in Sacramento is going viral on Twitter. The video shows a tense situation, where protesters are provoking police by getting in their faces and screaming on the steps of the California State Capitol.

Many protesters are holding American flags and signs with “stop tyranny” and “anti-vax” content.

“This is our capitol,” a woman can be heard shouting in the previous video.

“Brown folks are sprayed with tear gas for peacefully protesting,” one user tweeted. “This is the poster for white privilege.”

“Looks like some of the Blue Lives Matter crowd weren’t as pro-blue as they were anti-black,” one Twitter user said.

“Wow, look at how much Blue Lives Matter. Guess white people only like to say that when the police are beating on black and brown folks,” another user tweeted.

Users also pointed out that there has been little commentary from the Blue Lives Matter movement about the aggression toward police and whether it is justified or threatening.

Left Coast Right Watch tweeted a photo later in the protest where police took out batons. However, it does not appear they were used.