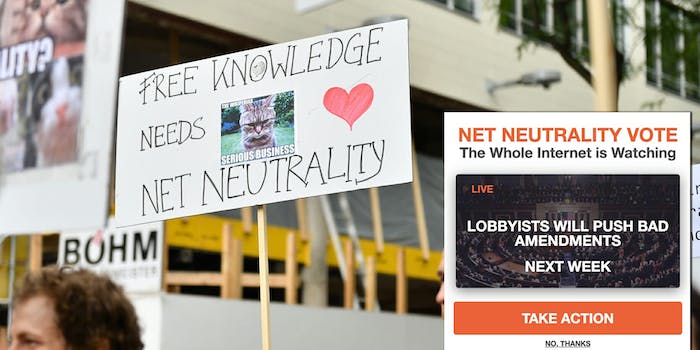 As the Save The Internet moves forward, so are net neutrality advocates.

Net neutrality advocates are planning to try and get as many people as possible to watch the progression of the Save The Internet Act by planning an online viewing party.

Fight For The Future, an internet rights advocacy group, announced on Thursday that it built a widget for websites to use that will livestream a committee markup on the Save The Internet Act, a bill that would undo the Federal Communications Commission (FCC) repeal of net neutrality and restore the 2015 Open Internet Act.

The goal, it appears, is to have as many people as possible watching how the bill progresses through the House of Representatives ahead of a full vote.

“Politicians seem to still be under the false impression that they put the interests of giant telecom companies ahead of the basic rights of their constituents and get away with it,” Evan Greer, the deputy director of Fight for the Future, said in a statement. “Sunlight is the best disinfectant, so we’re going to make sure that when they go to vote they know the whole internet is watching their every move. The overwhelming majority of voters want real net neutrality protections restored, they’re not going to tolerate any funny business or trojan horse amendments pushed for by telecom lobbyists.”

Rep. Mike Doyle (D-Penn.), who sponsored the House version of the Save The Internet Act, said earlier this month he expects to have a markup on the bill shortly. House Majority Leader Steny Hoyer (D-Md.) reportedly said the bill would get a full vote during the week of April 8.

The organization is also planning in-person protests to try and persuade members of the House Energy & Commerce communications and technology subcommittee who have not cosponsored the Save The Internet Act to do so.