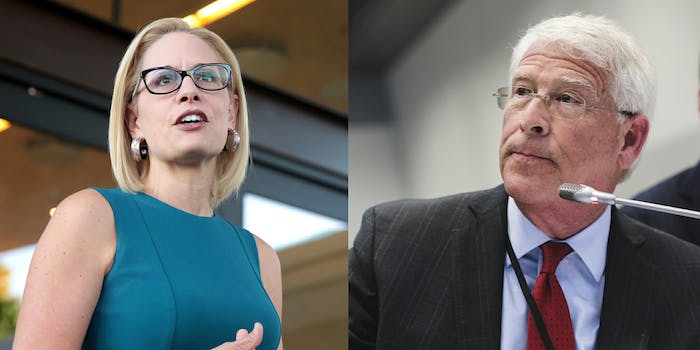 The 'working group' in the Senate comes as there was movement on a net neutrality bill in the House.

The announcement comes as net neutrality advocate groups have begun to ramp up pressure on Sinema—the only Democratic senator who did not originally cosponsor the Save The Internet Act—a bill that would undo the Federal Communications Commission’s (FCC) repeal and restore the 2015 Open Internet Order.

While Sinema did not originally cosponsor the bill, she could still vote for it if it got to the Senate floor. The Save The Internet Act was introduced in both the Senate and the House last week.

“Net neutrality is critical to maintaining a vibrant internet. We need a modern, internet-specific framework that encourages the freedom and innovation that make the internet the vital tool it is today—and consumers and providers need stability,” Sinema said in a statement. “We will only achieve those goals by working across party lines to find a bipartisan solution.”

Wicker added that the “working group” would try to “put partisan politics aside in order to provide permanent internet protections.”

The announcement was made just days after pro-net neutrality advocacy group Fight for the Future announced that it was crowdfunding to place a billboard “at one of the busiest intersections in Phoenix, Arizona” pushing people to ask her to support the bill. The group is also trying to get constituents of other lawmakers, both Democrats and Republicans, to cosponsor the bill.

The formation of the “working group” in the Senate comes after a legislative hearing in the House on Tuesday where there were clear partisan divisions on how to proceed with codifying net neutrality.

The Save The Internet Act is likely to pass in the House. Some Democrats during Tuesday’s hearing expressed a willingness to add amendments to the three-page bill, but it should be heading toward a markup after Tuesday’s hearing. It faces a more uncertain fate in the Senate.

If the “working group” headed by Sinema and Wicker leads to anything bipartisan, it will almost certainly have to address Title II of the Communications Act, a sticking point for both sides. It’s likely that either Democrats would have to give up the Title II provisions currently in the Save The Internet Act—a move that would anger most net neutrality supporters—or Republicans would have to acquiesce and allow the Title II provisions to remain.

If the Republican remarks in Tuesday’s House hearing are any indication, it does not seem likely that they will back down on their anti-Title II stance, despite lawmakers saying many of the more hefty regulations were taken out of the Save The Internet Act.