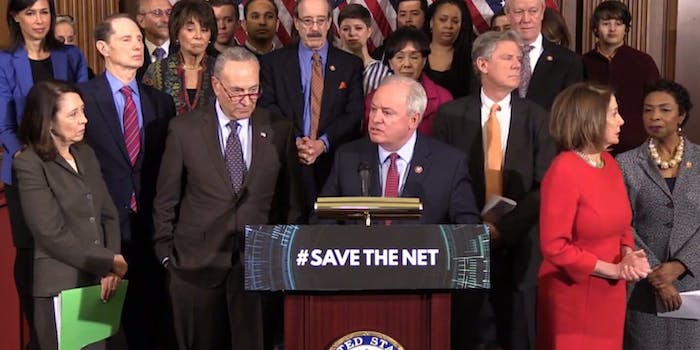 Democrats unveil ‘Save the Internet Act’ to restore net neutrality

The push is back on.

Democrats in Congress announced that a bill to reinstate net neutrality, called the “Save the Internet Act,” would be introduced—restarting an effort to bring back the rescinded rules legislatively.

The bill would essentially bring back all of the rules that were part of the 2015 Open Internet Order, which was repealed by the Federal Communications Commission (FCC) in 2017. It repeals the Restoring Internet Freedom Act, which the FCC passed and rescinded the rules on.

Notably, it will also bar the FCC from introducing another order aimed at repealing the rules, as Reuters reported early Wednesday.

“We’ve been working on this issue for a long time,” Doyle said, later adding: “The Save the Internet Act would enact true net neutrality protections by codifying the FCC’s 2015 Open Internet Order as a new free-standing section of law that would ensure the internet remains an open platform for innovation and competition.”

Markey, who was at the head of the CRA effort in the Senate last year, echoed Doyle.

“Whether it is in the halls of Congress or in the courts, we will not stop fighting until net neutrality is fully restored,” the Massachusetts senator said. “Today we take another important step in that fight. The fight to save the internet as we know it.”

“Last year we sent a message on net neutrality to Donald Trump and today we send another. This Congress won’t fall to his special interest agenda and his broadband barren allies. Instead, we will do right by the people who sent us here and protect the internet as we know it. We are on the right side of history and we will not give up this fight. It begins today and this coalition will not stop until we win.”

Here’s the Save The Internet Act of 2019 that nearly every Senate Democrat joined me in introducing today. 3 pages that will restore #NetNeutrality. Let’s pass it and make the internet free and open again. #SaveTheNet pic.twitter.com/BCYtcmcMe3

The bill will be acted on in a “matter of weeks,” Pelosi said.

A number of internet rights advocacy groups applauded the announcement on Wednesday.

“Put simply, the Save the Internet Act is the only real net neutrality bill out there. This is a simple up or down vote on the future of the internet and our most basic rights in the digital age,” Evan Greer, the deputy director of Fight for the Future, said in a statement. “Lawmakers have nowhere to hide. From now until the bill hits the floor for a vote, we will organize internet users en masse to demand that every single member of Congress to co-sponsor this legislation and will update our congressional ‘scoreboard’ so people know whether their elected officials are representing them or shilling for cable and phone companies… The Save the Internet Act is one of the few pieces of Congressional legislation that actually does what it says in the title. The Internet is going to come down like a political hammer on any lawmaker who fails to cosponsor it.”

Other groups like Demand Progress felt similarly—particularly because of its Title II classification, a classification that puts more strict regulation on internet-service providers (ISPs).

“The Save the Internet Act will restore the protections from the 2015 Open Internet Order and the strong legal framework of classifying broadband internet access under Title II of the Communications Act,” Mark Stanley, the director of communications for the organization, said in a statement. “This legal framework is crucial not just to preventing internet providers from blocking, throttling and engaging in paid prioritization, but also to safeguarding against privacy violations and promoting competition and broadband deployment. Lawmakers should not be fooled—no other legislation in Congress comes close to ensuring these strong protections, and the public will settle for nothing less.”

Free Press Action Vice President and General Counsel Matt Wood said in a statement that the act was the “only” choice for lawmakers to consider as a net neutrality bill because of its Title II classification.

“The bill’s authors reject lobbyists’ empty rhetoric and evidence-free claims, understanding that broadband investment continued and deployment increased with the 2015 Open Internet Order in place,” he said, adding: “Title II is essential for the broad and timeless nondiscrimination mandate that Congress wrote into this part of the Communications Act. That law empowers the FCC to prevent unlawful discrimination by ISPs, even when these companies’ tactics and tricks might not run afoul of the bright-line Net Neutrality rules in the 2015 order.”

What’s next for the ‘Save The Internet Act’

The bill’s chances of becoming law remain up in the air. Last year lawmakers tried to use the Congressional Review Act (CRA) to nullify the FCC’s repeal of net neutrality.

In the Senate, there was some bipartisan support for the effort, with several Republicans breaking ranks with their party and voting in favor of it. The House version of the CRA did not get enough signatures to force a vote.

However, now that the House is controlled by Democrats, it’s possible that this new bill could easily get the number of votes to pass.

If some Senate Republicans break with the rest of their party—like they did with the CRA last year—it’s possible the bill could reach President Donald Trump’s desk. Republicans have also offered up their own net neutrality bills, however, they do not have the Title II classification, which brought scorn from advocates.

“Believe it or not, it passed the Senate, it did, because of the hard work of my colleagues who are standing here,” Schumer said on Wednesday of the CRA effort. “But unfortunately a then-Republican House of Representatives just shelved it. So now we have a Democratic House and Republicans will have a second chance—there are second chances—to right the Trump administration’s wrong.”

The House announced earlier this week that it would have a legislative hearing for the bill on March 12. The hearing is titled “Legislating to Safeguard the Free and Open Internet.”