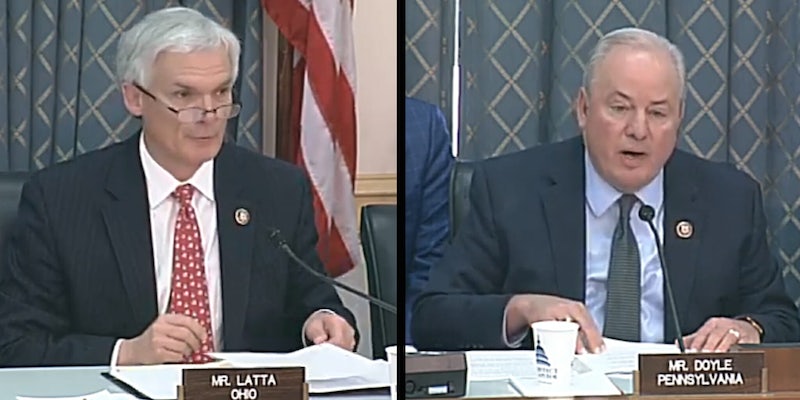 The 'Save The Internet Act' was center stage in Congress on Tuesday.

The Democrat-backed “Save The Internet Act” net neutrality bill was at the center of attention on Capitol Hill Tuesday, with Rep. Mike Doyle (D-Penn.), the chairman of the House communications and technology subcommittee, saying he intends for the bill to receive a subcommittee markup.

Getting the bill to markup would be the next major step in having the whole House vote on a plan to undo the Federal Communications Commission’s (FCC) repeal of net neutrality. The Save the Internet Act would reinstate the FCC rules that first enshrined them in 2015.

The bill was the focus of the House Committee on Energy & Commerce’s communications and technology subcommittee as part of its “Legislating to Safeguard the Free and Open Internet” hearing. The “Save The Internet Act” would also bar the FCC from introducing a repeal similar to the one they passed in late 2017.

“The approach that we are here discussing today charts a new course for net neutrality and puts in place 21st century rules for a 21st century internet,” Doyle said, later adding: “In doing so we removed much of the regulatory overhang of Title II that ISPs and our colleagues on the other side of the aisle have long complained about … This bill is a new approach and an open invitation to our colleagues and ISPs alike to come together and support a new way forward.”

Much like the last communications and technology subcommittee hearing on net neutrality, there were clear divides between Democrats and Republicans on how best to create a net neutrality law.

Most Democrats agree that internet service providers (ISPs) should be classified under portions of Title II of the Communications Act, a more restrictive section that allows the FCC to protect against unfair internet traffic practices, while Republicans disagree.

Several Republican bills offered up do not classify ISPs under Title II, while the “Save The Internet Act” does. It reapplies the 2015 Open Internet Order, which originally enshrined net neutrality rules.

Democrats argued on Tuesday that many of the more hefty regulations in Title II would not be part of the “Save The Internet Act” because they were not applicable.

“Our colleagues and people in the industry expressed concern that Title II with all its regulations,” would cause problems for the bill, Doyle said near the end of the hearing, adding: “So what we’ve done to address those concerns and step toward our colleagues is to codify the 2015 Open Internet Order … which means those 700 regulations and 27 sections are no longer applicable… So this was a good faith effort to move in their direction.”

Several Republicans on Tuesday argued that the “Save The Internet Act” did not have much of a chance of passing through the Senate.

There is uncertainty about the bill’s ultimate chances. Last year when Democrats tried to use the Congressional Review Act (CRA) to overturn the FCC repeal, several Republicans broke ranks with their party and voted in favor of it, leading to it passing. Doyle also brought up that point during the hearing on Tuesday.

The House, then controlled by Republicans, did not amass the needed number of signatures to push its CRA forward. With Democrats controlling the House, it’s likely the “Save The Internet Act” would pass now.

Of course, if it were to pass through both chambers, President Donald Trump would need to sign it into law.

The House version of the “Save The Internet Act” was introduced last week, with more than 130 lawmakers cosponsoring it.