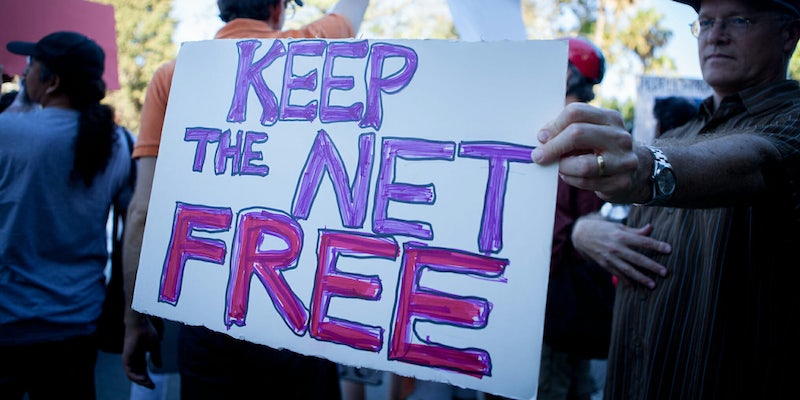 The open letter is addressed to Democratic leadership in the House.

More than 30 net neutrality advocacy organizations have signed an open letter to Democratic leadership in the House of Representatives slamming a draft letter signed by some lawmakers in the caucus calling for a net neutrality working group to be formed in the chamber.

The advocates’ letter was published on Wednesday, and addresses a draft letter signed by a number of Democrats in the House that says a working group is needed to create “bipartisanship consensus” on net neutrality despite passing the Save the Internet Act just last month.

The lawmakers say in their letter, which as of Tuesday had not been delivered to leadership, that a bipartisan working group is needed because they feel the Save the Internet Act is “unlikely” to move forward in the Senate.

“It has come to our attention that a letter is circulating signed by representatives that calls for a working group on net neutrality—modeled on the Wicker-Sinema effort in the Senate—that would abandon the Save the Internet Act,” the letter signed by net neutrality advocacy groups reads. “This is extremely troubling, and an affront to the millions of Americans from across the political spectrum who rely on an open internet and have called on Congress to support strong net neutrality.”

“With litigation to overturn the FCC’s net neutrality repeal currently pending, and with immense public support behind the Save the Internet Act, now is the exact wrong time to push for alternatives to the bill passed just last month. The Save the Internet Act is a common-sense bill with overwhelming bipartisan public support, and these attempts to undermine it by establishing a working group to advance disingenuous legislative efforts are strongly opposed by our organizations.”

NEW: Every single major #NetNeutrality advocacy organization in the US has signed on to an open letter condemning the bogus letter being circulated by telecom friendly Democrats in the House calling for a disingenuous "working group" https://t.co/mslMChHCgY

The draft letter signed by some House Democrats says a net neutrality working group formed by Sen. Kyrsten Sinema (D-Ariz.) and Sen. Roger Wicker (R-Miss.) in the Senate is a model they hope to emulate. Both Wicker and Sinema have expressed concerns with using a law like Title II of the Communications Act in a net neutrality bill, which advocates have argued is essential.

That Senate group has also been criticized by advocates as a “charade” and “a total farce.”

Wednesday’s letter says the Sinema-Wicker working group, and the calls for a similar one in the House, “means to undermine the bill the House just passed, and the strong but flexible net neutrality framework it restores.”

Mark Stanley, the director of communications at Demand Progress, echoed those sentiments in a statement to the Daily Dot.

“Advocates recognize this proposal for a so-called ‘working group’ for exactly what it is: An attempt to undermine the Save the Internet Act,” Stanley said. “Now is absolutely the wrong time to push for legislation in the House other than the recently-passed Save the Internet Act, which would restore crucial net neutrality protections and enjoys overwhelming public support. Lawmakers who want to be seen as standing for a truly open internet should distance themselves from this ill-conceived effort.”

You can read the letter signed by net neutrality advocacy organizations here.