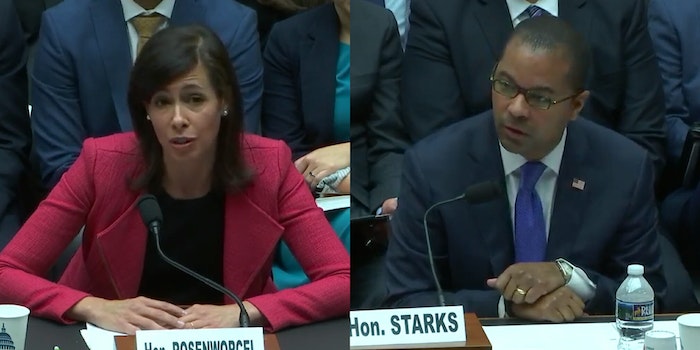 The FCC was grilled by lawmakers on a number of topics on Wednesday.

Both Democratic commissioners for the Federal Communications Commission (FCC) praised the Save the Internet Act, a law that would restore net neutrality rules, on Wednesday during the commission’s oversight hearing by the House’s Energy and Commerce Committee’s communications and technology subcommittee.

Commissioners Jessica Rosenworcel and Geoffrey Starks brought up net neutrality during their opening statements at the beginning of the oversight hearing.

The Save the Internet Act passed in the House last month but faces an uncertain fate in the Senate, where—unlike the House—not all Democrats are on board with the current bill.

Rosenworcel said the agency created a “mess” with its repeal of net neutrality in her written testimony, adding that it allowed an environment where consumers can’t turn to other internet service providers if they block, throttle, or censor certain websites.

She continued while speaking before the subcommittee, noting the federal court battle over the FCC’s repeal.

“Perhaps…the agency is best known for its misguided effort to roll back net neutrality,” Rosenworcel said before the subcommittee. “As a result of this decision, you’re broadband provider now has the right to block websites and censor online content. That doesn’t sound good to me, and it doesn’t sound good to the American public either—86 percent of whom support net neutrality. Should we have a court remand, I sincerely hope we take a cue from your Save the Internet Act and decide to change course.”

Rosenworcel also blasted the process the agency took ahead of its repeal in her written testimony—highlighting the FCC’s initial insistence that it was hit by a distributed denial of service (DDoS) attack for its public comments before eventually admitting that such an attack did not occur.

Meanwhile, Starks praised the subcommittee for pushing the Save the Internet Act through the House.

“Millions of Americans have spoken with the same voice—that they want the internet to remain open and unfettered—and the Save the Internet Act has given action to that voice. I will continue to also be a champion for this issue,” he said during his opening statement.

You can watch the FCC oversight hearing, where a number of other topics are expected to be discussed, here.