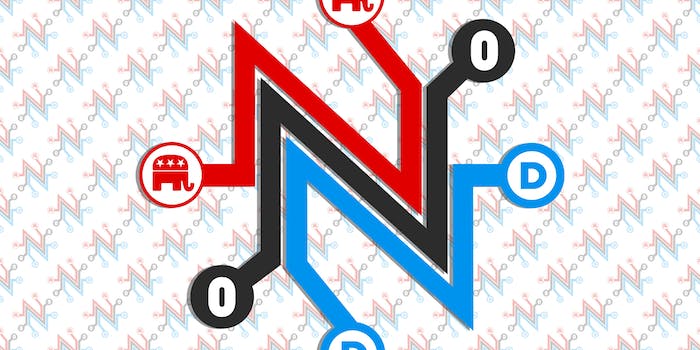 The House Democrats want a working group like the one in the Senate.

A group of Democrats in the House of Representatives are expected to call for the creation of a net neutrality working group in the chamber because they feel the Save the Internet Act is unlikely to become law as it is currently written.

Around three dozen lawmakers are crafting a letter to send to the House’s Democratic leadership—including House Speaker Nancy Pelosi (D-Calif.) and Majority Leader Steny Hoyer (D-Md.)—expressing their desire for a working group to be formed in the wake of the Save the Internet Act not gaining traction in the Senate, where Senate Majority Leader Mitch McConnell called the bill “dead on arrival.”

The draft letter was signed by more than 30 Democrats in the House, and staffers for six lawmakers confirmed to the Daily Dot this week that their lawmakers signed it. The draft letter has not yet been delivered, according to two sources familiar with the matter.

The Save the Internet Act act would essentially undo the FCC’s repeal of net neutrality and restore the 2015 Open Internet Order. But in the Republican-controlled upper chamber, the bill faces an uphill battle.

A draft of the letter was obtained by net neutrality advocacy group Fight for the Future and shared with the Daily Dot. It calls for a bipartisan working group to be formed in the House, citing a similar one created by Sen. Kyrsten Sinema (D-Ariz.) and Sen. Roger Wicker (R-Miss.) in the Senate. That Senate group has been criticized by a number of net neutrality advocates.

Net neutrality advocates have argued that Title II of the Communications Act is a must-have as the foundation of any law and have announced their displeasure with this call for a working group. Both Wicker and Sinema have expressed concerns with the inclusion of laws similar to Title II, echoing sentiments of a number of Republican lawmakers in the House ahead of a possible vote for the Save the Internet Act.

The House letter does not mention Title II specifically, but stresses that a new bill should be passed with a “bipartisanship consensus.”

The Save the Internet Act passed in the House last month. Just one Republican voted in favor of the bill then.

Most of the members of the House who signed the letter also voted for the Save the Internet Act, and in the letter they commend the bill’s passage before calling for the working group.

“We, the undersigned, voted for this legislation because it represented an opportunity to resolve questions that courts have struggled with for decades,” the letter says, according to text shared with the Daily Dot. “At the same time, we recognize that this legislation is unlikely to become law, or pass through the Senate, in its current form. If that proves true, consumers will be left without enforceable net neutrality protections while partisan conflict continues. We believe this result is unacceptable and unnecessary.”

The Daily Dot reached out to representatives for all of the lawmakers who signed the draft letter. Of the six offices that confirmed they signed it, only one–Rep. Joe Cunningham (D-S.C.)–offered a statement.

“Rep. Cunningham believes net neutrality is fundamental to guaranteeing that every American has unencumbered access to the internet,” Rebecca Drago, a spokesperson for Cunningham, said. “It’s also necessary to ensure a competitive, free market for the technology economy … Joe wants to see a law enacted on net neutrality as soon as possible and believes the creation of a bipartisan working group in the House is the best way to create bipartisan consensus.”

However, the effort was not without criticism, particularly from net neutrality advocates. Evan Greer, deputy director of Fight for the Future, said “no one” was going to be fooled by the call for a working group.

“I wouldn’t be surprised if this letter was drafted with the help of lobbyists from AT&T and Comcast,” Greer said. “It mimics their talking points exactly … Zero net neutrality advocacy groups support this–the only reason any lawmaker would sign this letter is if they’re cozying up to big cable, or they’ve been duped by one of their colleagues into thinking this is a pro-net neutrality position. The line that refers to ‘various models for legislation’ almost certainly implies an openness to weak, loophole-filled, unenforceable legislation that claims to save net neutrality while permanently undermining it, which is what telecom lobbyists and their friends in Congress have been pushing for years.”