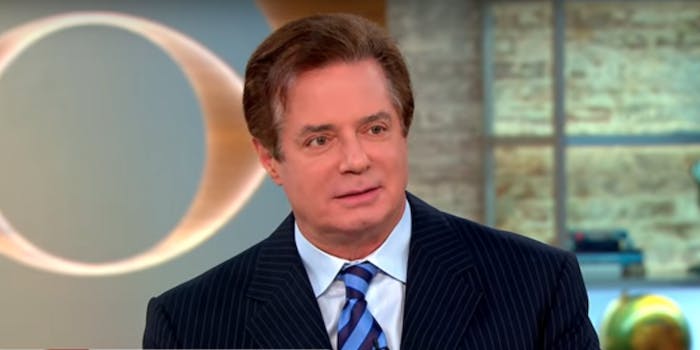 Former Trump campaign chairman Paul Manafort was found guilty on eight counts of fraud on Tuesday. The trial came about from special counsel Robert Mueller‘s team as part of its probe into Russian interference in the 2016 presidential election and related matters.

A judge declared a mistrial for 10 other counts against Manafort after jurors could not come to a consensus on a unanimous verdict. Five of the counts against the former Trump campaign chairman were related to tax fraud, NBC News reports. One count was for failing to declare a foreign bank account, and two counts were for bank fraud, according to CNBC.

BRK: Manafort GUILTY on 8 counts: 5 counts of felony tax fraud. One count of failing to declare foreign bank account, and two more counts of bank fraud. Mistrial declared on the other 10 counts. Trump and Manafort in 2016 >>> pic.twitter.com/1OmfX0SwWi

2) Not filing a form to report a foreign bank account as required in 2012.

The charges are not related to Manafort’s work on President Donald Trump‘s 2016 presidential campaign. Manafort surrendered to the FBI late last year.