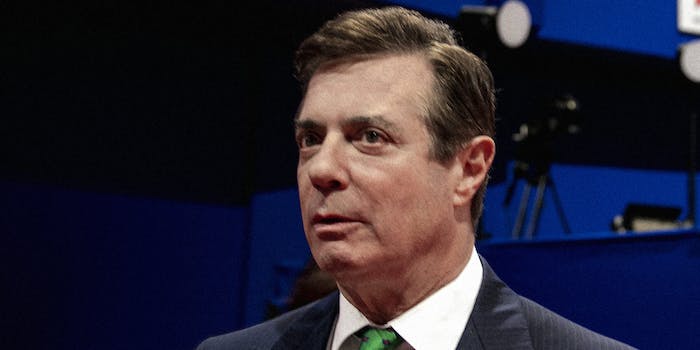 The indictment includes 12 charges. You can read it in full here.

On Monday, Manafort surrendered to federal authorities on charges that were brought down as part of Special Counsel Robert Mueller’s sprawling probe into Russian interference in the 2016 election and related matters.

While the indictment does not include references to Trump’s campaign, it does highlight much of the work the two men allegedly did prior to joining the campaign, including alleged money laundering and a “multi-million dollar lobbying campaign” in the United States on behalf on Ukrainian President Viktor Yanukovych without “registering and providing the disclosures required by law.”

“Manafort used his hidden overseas wealth to enjoy a lavish lifestyle in the United States without paying taxes on that income,” the indictment reads.

It’s been reported that Mueller’s charges against Manafort and Gates–who continued to work on Trump’s campaign after Manafort left–could be used as leverage to obtain other information related to the Russia probe.

You can read the entire indictment here: