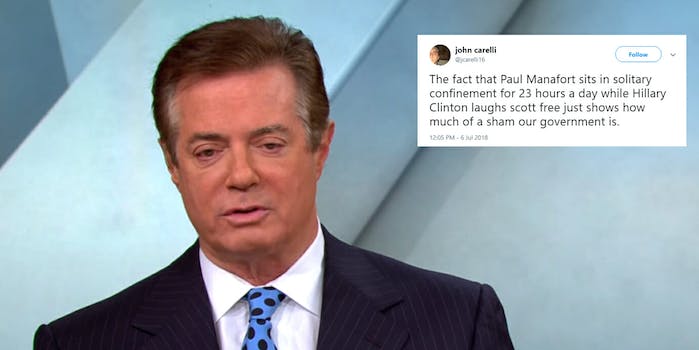 People are pointing out that, yeah, solitary confinement is bad.

OLawyers for former Trump campaign chairman Paul Manafort said on Thursday that he is being held in solitary confinement because “the facility cannot otherwise guarantee his safety,” leading some conservatives online complain about the United States criminal justice system–a major talking point among Democrats.

Manafort is being held in solitary confinement for 23 hours a day, his lawyer wrote in an appeal brief, according to Courthouse News. The imprisonment, according to his lawyer, is also hurting him from preparing a defense to charges handed to him as part of Special Counsel Robert Mueller‘s probe into Russian interference in the 2016 election and other related matters.

Others just seemed aghast at the lack of “justice” being given to Manafort.

Of course, others online pointed out that solitary confinement is cruel, and used often in the country’s prison system.

One tweet in particular from a reporter at the Washington Examiner seemed to invoke a number of responses.

Congrats to Byron York and others who are discovering our harsh criminal justice system now that a rich, white fellow-partisan is enduring it. https://t.co/8OMo28s9h6

what if Paul Manafort's only positive contribution to society is awakening the right's consciousness to the horrors of the carceral state https://t.co/XYGZ0GEKFi

Awesome, now do one for all the brown people and poor people in the same confinements….. https://t.co/bQr6TKVlBc

Breaking: The World's Largest Prison System Briefly Affects Rich White Dude (Who Can Meet With His Attorneys Whenever They Want) From The Party That Campaigned For Decades On Making The Prison System Work Like This https://t.co/nBy5yyRqC2

Solitary confinement is awful and should never be used. Even for Paul Manafort.

From "Lock her up!" To "Please get Paul Manafort out of solitary" real fast

Manafort’s bail was revoked in late April, and he is appealing that decision. Mueller’s team charged him with money laundering and other crimes late last year.