One of them is believed to be the man in the gruesome ISIS execution videos.

The man believed to be behind the mask in Islamic State’s gruesome execution videos has direct ties to Anonymous hacktivism. And he’s not alone.

The Sunday Times revealed in August that Abdel-Majed Abdel Bari, a British rapper known as “Lyricist Jinn,” is suspected by authorities to be “Jihadi John,” the Islamic militant who appears in videos depicting the executions of American journalists James Foley and Steven Satloff, and British aid worker David Haines, among others.

A video released last Saturday appears to show the execution of humanitarian worker Peter Kassig by the same individual. Although U.S. authorities claim to have identified the militant known as Jihadi John, they have so far declined to comment on his name or nationality. Video of a London street protest captured in 2011 was widely circulated this week featuring an interview Bari, who many now alleged could be the man with the executioner’s knife.

Working in 2011 with multiple hacktivists, Bari announced plans to create a music video in support of an anti-censorship initiative founded by Anonymous and their occasional rivals TeaMp0isoN. The project was publicized by many prominent activists accounts, including @YourAnonNews, which was at the time under a different owner and sporting far fewer than the 1.31 million followers it has today.

Released in Jan. 2012, Bari’s “OpCensorThis” video was a tribute to hacktivism and a denunciation of the U.S. government, which he dubbed “the biggest form of terror.” Proceeds raised by the music video were to be donated to the East Africa crisis appeal, launched by the U.K.-based Disasters Emergency Committee (DEC) that June to combat drought and famine in the region. It’s unconfirmed whether Bari ever managed to generate any funds from the video.

According to British media outlets, Bari left his family’s home in London’s Maida Vale neighborhood last year to join jihadists fighting in Syria against President Bashar al-Assad’s regime. Last February, a message from Bari’s now-suspended Twitter account claimed that he and another individual, identified as “Abu Hussein Al Britani,” were kidnapped and tortured by members of the Free Syrian Army (FSA) and Islamic Front, who stole their weapons, phones, cash and vehicle.

The man identified by Bari as “Abu Hussein” is known, in fact, to be Junaid Hussain, TeaMp0isoN’s founder. Under the alias “TriCk,” Hussain claimed responsibility in 2011 for hacking, among other targets, the Facebook accounts of company cofounder Mark Zuckerberg and former French President Nicolas Sarkozy, and for publishing the personal information of former British Prime Minister Tony Blair. He was arrested for the computer crimes as a minor, and last year skipped bail over allegations of violent disorder, announcing his plans to flee into the Syrian conflict zone.

After learning last year that Hussain had left London en route for Syria, the Daily Dot requested an interview when and if he reached his destination. That interview never took place. Hussain has remained active online, however, calling for Islamic jihad on American soil and prodding British Muslims to follow in his tracks.

Is there not anyone in the UK that will respond to the call of Sheikh Muhammad al Adnani? Wheres the lions at!

Not sure if true but im hearing that soldiers from the #IslamicState military base in #Canada conducted a successful operation today!

In August, a photograph of a man wearing a black mask and camouflage and apparently holding a severed human head was tweeted from an account attributed to Bari. The gruesome photo was captioned: “Chillin’ with my homie or what’s left of him.” Media sources claim that photo was taken in the town square of Raqqa, Syria, the declared capital of ISIS’s so-called caliphate. A similar photo was allegedly taken there days before, by Australian jihadist Khaled Sharrouf, depicting a 7-year-old child also holding a severed head.

“That’s my boy,” Sharrouf reportedly tweeted along with the picture. 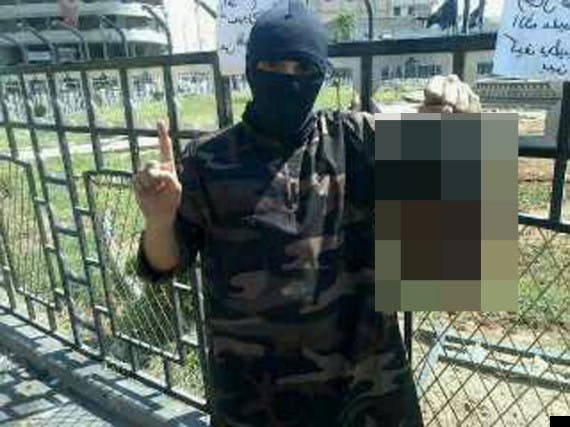 Bari’s father, Adel Abdel Bari, pleaded guilty in September to a three-count indictment in connection with the 1998 U.S. embassy bombings in Kenya and Tanzania. A month after the attacks that claimed the lives of 212 people, Adel was apprehended by a dozen police officers in a dawn raid at his home with his wife and children, including Bari.

In the song “The Beginning,” Bari talks about witnessing his father’s arrest as a child and a lyrical gun in his hands:

I swear the day they came and took my dad I could’ve killed a couple too
And I wouldn’t have looked back.
Imagine back then I was only six.
Just picture what I’ll do now with a loaded stick.

Prior to his extradition to the U.S. on Oct. 6, 2012, Adel was held in the U.K. for roughly 13 years. He currently faces up to 25 years in prison for conspiring with Osama Bin Laden and the current leader of al-Qaeda, Ayman al-Zawahiri.

“Long have activists and revolutionaries turned to a song to get their message out,” Anonymous wrote in its 2011 #OpCensorThis press release. “Anonymous and TeaMp0isoN have collaborated together to continue this tradition.”

In August, a YouTube account named “Team Poison” reposted Bari’s hacktivist song. The owner is unknown, but a month later, another video was published criticizing the U.S. government’s involvement in Syria. “The goal now is the same as it was last year, regime change in Syria, the toppling of the Assad government, and protecting some oil interests while they’re at it,” the video says.

Photo via tomsun/Flickr (CC BY 2.0) | Remix by Fernando Alfonso III