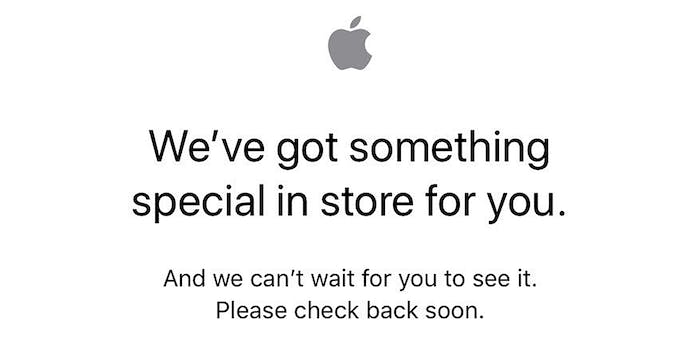 The $1,000 flagship is already facing shipment delays of five-to-six weeks.

Long digital lines formed outside of Apple’s website and App Store as pre-orders for the iPhone X went live early Friday morning. While strong demand for a device crucial to Apple’s success is a good sign, many customers were turned off when technical difficulties delayed their purchase.

The drama was on full display as angry customers took to Twitter to voice their complaints. In some parts of the world, the Apple Store appeared to be down for 10 anxious minutes. This forced customers to purchase through a carrier. The good news is that the iPhone X is SIM-free, which means all models come unlocked and aren’t tied to a specific network.

What’s going on with the Apple Store app in Australia? iPhone X preorders were meant to open a few mins ago pic.twitter.com/Pt2Dzd2wgT

Apple Store was down. Panicked. Back doored one through Verizon. Though I submitted payment like 12 times, so I may have a dozen.

Success! Ordered through the online store at https://t.co/yN9bH9HyBa. Hit it up; the iOS Apple Store app stills seems to be down! pic.twitter.com/3hUweZ6AcF

It wasn’t only the iPhone X’s $1,000 price tag that kept people from ordering the phone. Several customers were having problems loading the Apple Store app, which the tech giant claimed would be the fastest method to purchase an iPhone X.

Can anyone actually get the @Apple Store site or app to load? Because mine just keep saying it's got something special in store for me

Apple: The best way to pre-order the #iPhoneX is with the Apple Store app.
Also Apple: HAHAHAHAHAHAHAHHAHAHA they believed us!

I bet all the people that used Apple Store app last night to try and pre-order are mad. Verizon site and app were doing orders by 2:55am.

The pre-order problems are a bumpy start to the release of an important device for Apple. More than two-thirds of all Apple sales come from the iPhone, but sales dropped for the first time last year and weak demand for the iPhone 8 is putting a lot of pressure on the tenth-anniversary device.

As expected, only the quickest and most dedicated customers will be getting their hands on the X on its scheduled Nov. 3 ship date. CNET reports shipping delays started to pop up just 10 minutes after the phone went on sale. Anyone who didn’t score one earlier today can still pre-order the device from carriers or directly on Apple’s website, but current ship times sit at five-to-six weeks.

If you can’t wait that long, you can always break out your lawn chairs and sit in line at an Apple store on Nov. 3 at 8:00am local time. Just make sure to get there early—analysts expect stores to sell out quickly and reported supply shortages for the phone’s Face ID could push shipping dates back even further.