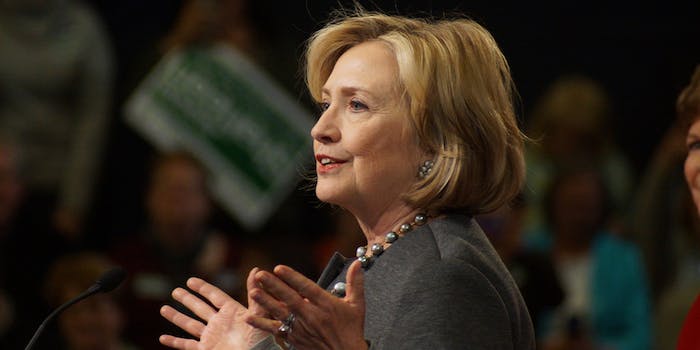 With 34 percent of precincts reporting, Clinton has captured 58.5 percent of the vote to Sanders’s 40.2 percent. While she will walk away the majority of the state’s 21 delegates, Sanders will pick up a few as well, as they are awarded proportionally in the state’s Democratic contest.

It’s not your usual primary day for voters of the First State. Usually, a clear Democratic victor is apparent by mid-April, before the state’s primary elections roll around. (Although Clinton maintains a significant edge over Sanders in terms of party delegates, she has yet to sow up the race entirely.) Delaware typically receives little attention from the Democratic candidates, but this year Clinton and Sanders were in full stump mode, drawing large crowds this week in the state’s largest city of Wilmington.

Before a crowd of 3,000 on Monday, Sanders berated the “rigged” financial system. “If we think about half a loaf, we will get crumbs,” he told supporters at riverfront Chase Center. “If we think about small ideas, we will get small results.” It was a tough sell for the Vermont senator in a state where approximately 10 percent of the workforce is employed by the financial sector.

Sanders also spoke of his plans as president to invest in jobs and education. One of his campaign promises is to provide American students with a tuition-free college education. “There are kids right here in Wilmington, in the fourth grade or in the sixth grade, whose parents never went to college,” he said. “It’s not in their purview. They’re not thinking about that and therefore they’re not doing their schoolwork and studying the way they should.”

Clinton was received on Monday by a crowd of roughly 700 Wilmington supporters at World Cafe Live at the Queen. “If you will go out and vote for me tomorrow, I will stand up and fight for you through this campaign and all the way to the White House,” she said.

Much of Clinton’s speech was directed not at Sanders, but the presumptive Republican nominee, real estate mogul Donald Trump. “Come out of those towers named for yourself and actually talk to people,” she said. (Trump, meanwhile, addressed an estimated crowd of 3,500 supporters at Pennsylvania’s West Chester University on Monday, where he attacked Clinton as “crooked”.)

The 2016 election continues on May 3, when candidates from both parties will vie for voter support in Indiana.