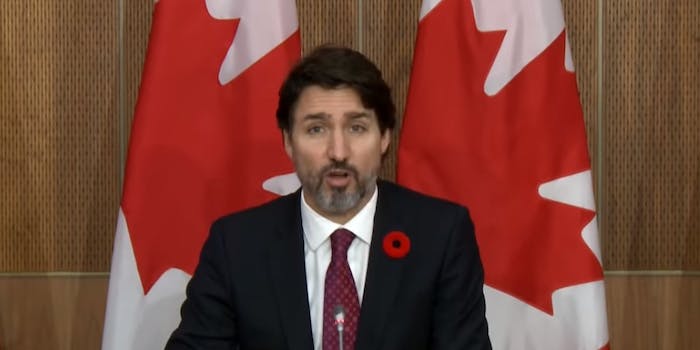 They think coronavirus was a plot to create a new world order.

Internet conspiracy theorists have resurrected a belief that global elites created the coronavirus pandemic as part of an evil plot to create a new world order via the “Great Reset.”

It’s all thanks to Canadian Prime Minister Justin Trudeau

Conspiracy theorists think that the real goal of the “reset” is to create a global totalitarian regime.

The theory first circulated over the summer. As with many conspiracy theories, the logic behind the belief in a great reset plot is convoluted and largely based on half-truths and misinformation. So-called evidence includes a book by World Economic Forum (WEF) founder Klaus Schwab, a 2016 piece by the WEF, President-elect Joe Biden‘s campaign slogan, and, now, a recent Trudeau speech.

In the 2016 piece on the WEF website, experts from its Global Future Council made predictions about life in 2030. One quote that the conspiracy theory crowd clung to as evidence that global socialism is imminent is from a since-deleted 2016 tweet linking to the piece in which WEF reportedly wrote, “You’ll own nothing, and you’ll be happy. This is how our world could change by 2030.”

Schwab’s book centered on whether the pandemic has afforded an opportunity to rethink, or reset, approaches to challenges like poverty, climate change, and justice.

“This pandemic has provided an opportunity for a reset. This is our chance to accelerate our pre-pandemic efforts to reimagine economic systems that actual address global challenges like extreme poverty, inequality, and climate change.”

After it was posted on Twitter on Nov. 14, Trudeau’s speech reignited the “Great Reset” fervor. As of Monday, a clip of his remarks had been viewed more than 3 million times, often alongside comments such as, “He says all the keywords here. They’re all in on it, globally.”

Each piece of so-called evidence they cite is merely discourse about how to create a more just and sustainable world.

Yet conspiracy theorists present it as an evil scheme to implement global socialism and potentially enslave much of the planet. They believe that COVID-19, the deadly disease caused by the novel coronavirus, was created to foster the conditions that would allow a vast restructuring of world government and economic systems under this totalitarian regime.

Even Robert F. Kennedy Jr., a formerly respectable environmentalist whose descent into anti-vaxer and conspiracy theorist territory has been stunning to behold, has repeated the theory.

Rethinking the economic system is nothing new. Schwab writes in Time magazine that he first suggested shifting from purely profit-driven capitalism to a system in which private corporations are also trustees of society, meaning their priorities include the greater good in addition to the almighty dollar, a half-century ago.

Issues such as economic inequality, environmental degradation, climate change, and the like are behind a resurgence of such thinking, as is growing consensus among some that unfettered capitalism isn’t working to address these concerns. World leaders and prominent thinkers are beginning to wonder whether society might be improved by some socialist policies, such as higher taxes on the wealthy, additional environmental regulations, and programs like those proposed in the Green New Deal, the Hill reported last summer.

No one is suggesting creating a global socialist dictatorship to affect such policies.

While conspiracy theorists raged about global elites and a new world order, others pushed back.

“Imagine thinking that this was some sort of pernicious conspiracy on the part of global elites rather than an attempt to make life better for billions of people,” he tweeted.