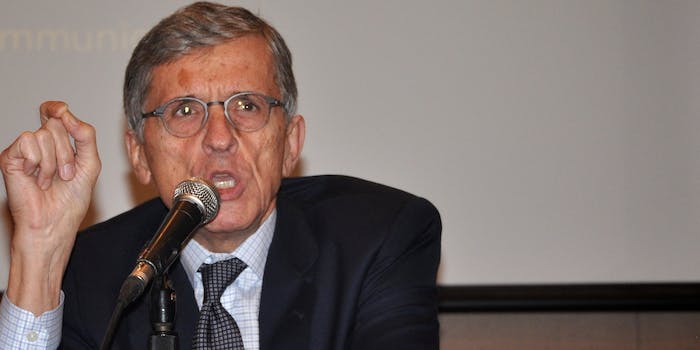 In the best news yet for net neutrality activists, FCC Chairman Tom Wheeler on Wednesday stopped just short of admitting that he and his agency were truly on their side.

At issue is whether Wheeler will vote to enact so-called Title II regulation and reclassify the Internet as a public utility, the outcome favored by people who oppose the idea of Internet service providers charging certain websites extra money to deliver their content at full speed.

At a Wednesday panel at the Consumer Electronics Show (CES) in Las Vegas, Wheeler gave the best evidence yet that he would push for that when he confirmed that the agency would vote on net neutrality on Feb. 26.

“We’re gonna circulate [a proposal] to the commissioners on Feb. 5 and we’ll vote on it Feb. 26,” he said. “So we’re down to the short strokes on this.”

Never in his year-long tenure as FCC chairman has Wheeler said that he wouldn’t enact Title II. Yet many activists think he’s been frustratingly vague and political about it, insisting, as he still did Wednesday, that “every other approach was on the table,” including a controversial, so-called “hybrid” approach to policy. The rest of his comments, however, were the strongest indication to date that he was firming up a genuine Title II proposal.

“I don’t think everybody was aware of this, but last summer, we began investigating various approaches using Title II,” he said at one point.

At a different part of his talk, interviewer Gary Shapiro, president of the Consumer Electronics Association, prodded him directly. “What I’ve heard you say is you’re going down the Title II path,” he said.

Wheeler smiled and notably didn’t deny Shapiro’s words, though he didn’t directly confirm them either. He did, however, continually pepper his talk with anecdotes that supported this assumption. He recalled when President Obama, fresh off the Democrats’ midterm loss of the U.S. Senate, renewed his vigor for net neutrality and openly called out Wheeler.

“When the President came out and said hey, he was for Title II,” Wheeler said, “there was an effort made to say ‘Wheeler and the President are pulling in opposite directions on this.’ Which made for good headlines, but wasn’t exactly reality, because we’re both pulling in the same direction.”

“Chairman Wheeler appears to have heard the demands of the millions of Internet users who have called for real net neutrality protections,” Free Press president Craig Aaron said in a statement.