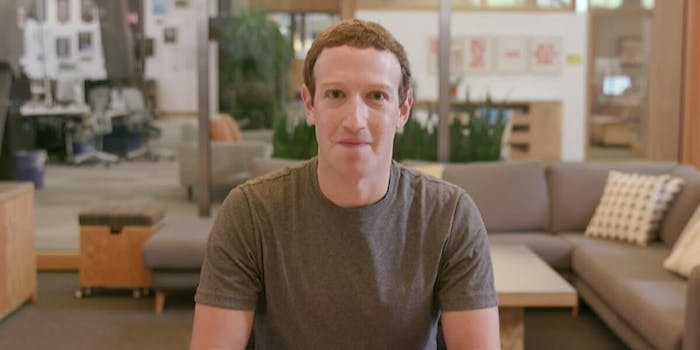 The video, which was posted to Facebook-owned Instagram last week, pokes at the tech giant–as Facebook has stated that it wouldn’t remove videos like this in the past.

“Imagine this for a second: One man, with total control of billions of people’s stolen data, all their secrets, their lives, their futures,” the fake Zuckerberg says in the video. “I owe it all to Spectre. Spectre showed me that whoever controls the data, controls the future.”

The video is part of an art exhibition dubbed Spectre. Spectre, created by artists Bill Posters and Daniel Howe alongside advertising company Canny, was presented at the Sheffield International Documentary Festival in England.

Facebook has also been at the center of numerous privacy scandals lately–all with Zuckerberg at the helm.

“In response to the recent global scandals concerning data, democracy, privacy and digital surveillance, we wanted to tear open the ‘black box’ of the digital influence industry and reveal to others what it is really like,” Posters said.

Aside from Zuckerberg, the team also created deepfakes of numerous other high-profile individuals, including Kim Kardashian.

The video shows the fake Kardashian praising big data for giving her the ability to manipulate “people online for money.”

The videos were created by first filming two voice actors mimicking Zuckerberg and Kardashian. Using artificial intelligence, the mouth movements of both actors were then superimposed over real videos of the Facebook CEO and Hollywood celebrity.

As noted by Motherboard, the Zuckerberg deepfake comes just weeks after Neil Potts, Facebook’s director of public policy, stated that the platform would not remove a video that had purposely been slowed down to make House Speaker Nancy Pelosi (D-Calif.) appear intoxicated.

In defense of the decision, Potts said that Facebook would make the same choice even if an altered video of Zuckerberg were posted.

Pentus-Rosimannus: If instead of Pelosi, a doctored video of Mark Zuckerberg was slowed down to make him seem impaired, would you leave it up?

So far, it appears Facebook is keeping its word.