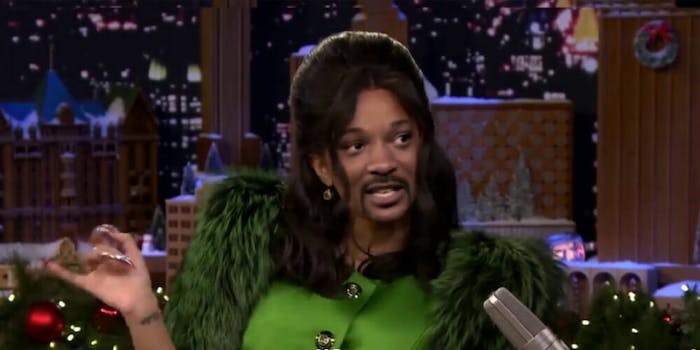 It turned Will Smith into Belcalis Smith. Okkkur.

A new deepfake video combing actor Will Smith and rapper Cardi B has gone viral and earned praise from both of the celebrities.

Uploaded to YouTube Friday by deepfake creator Myster Giraffe, the clip shows Smith’s face on the body of Belcalis Almánzar, aka Cardi B, during a 2017 interview on The Tonight Show Starring Jimmy Fallon.

In the video, Cardi B discusses how she acquired the now-household name while sporting Smith’s likeness.

The video first spread on multiple deepfake forums before eventually making its way to Smith and Cardi B.

Smith reacted to the deepfake in a post on Instagram Saturday, describing the video as “so good” to his nearly 33 million followers.

Y’all are doin’ Too Much!! Hahaha… This is SO GOOD. Anybody know who did this??

Cardi B also shared the clip on multiple social media accounts Saturday, earning the deepfake millions of views in the process.

“That one time I drank biotin,” Cardi B joked on Twitter.

That one time I drank biotin. pic.twitter.com/1NuParoaf9

Deepfakes are created with publicly available tools, which use artificial intelligence to map one individual’s face onto another’s.

The technology first emerged online in late 2017 and was used primarily to place female celebrities into pornographic videos. Since then, deepfakes have become easier to create and much more realistic.

The U.S. government has even invested in developing techniques to detect deepfakes over fears that fake videos could be used to disrupt democratic elections. Attempts have also been made to pass legislation in numerous states to criminalize the malicious use of deepfakes.

While much attention has been given to the potential dangers of deepfakes, the technology is already being utilized as an educational tool.

A campaign to end malaria recently released a promotional video that used deepfake technology to give soccer star David Beckham the ability to speak out against the disease in nine different languages. An art museum in Florida also developed an interactive display featuring Spanish surrealist Salvador Dalí thanks to the technology.

The Daily Dot has reached out to Myster Giraffe.