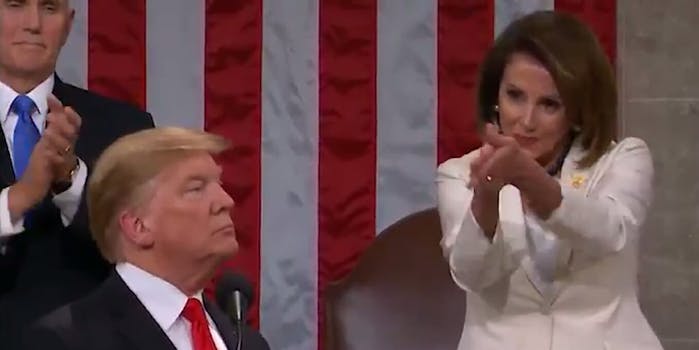 The internet is all about Pelosi's sarcastic clapping.

Last night, President Donald Trump delivered his State of the Union address to members of Congress. As expected, his words prompted vastly different responses from people on separate sides of the aisle.

While his supporters couldn’t get enough of Trump‘s speech, many Democrats were reserved and even frosty in response to the president’s words. But it was Nancy Pelosi’s reaction to Trump’s call for “cooperation, compromise and the common good” that stole the show, and her mocking applause quickly became a meme.

Nancy Pelosi sarcastically claps at President Trump after he calls for Americans to “reject the politics of revenge, resistance, and retribution, and embrace the boundless potential of cooperation, compromise, and the common good." #SOTU pic.twitter.com/gGDTXXPNHe

The meme became an instant viral hit, spreading through the internet like wildfire. “Nancy Pelosi,” @PoliticusSarah captioned the photo, “A montage of polite disdain with a side of shade.”

Nancy Pelosi, a montage of polite disdain with a side of shade:

(Reuters and pool via Reuters) pic.twitter.com/jPDQPrySYU

Who knew clapping could convey rage, disdain and threats of revenge… pic.twitter.com/u9c4lXM4ri

One user even compared her to Lucille Bluth, the stern matriarch of the Bluth family in Arrested Development. Another compared Pelosi’s disinterested clapping to that of Hermione Granger in Harry Potter and the Sorcerer’s Stone.

Other people saw reflections of their own lives in the speaker’s carefully polite applause. “When I tell my wife I changed a diaper,” @Mikel_Jollet said.

When I tell my wife I changed a diaper. pic.twitter.com/N2ncXAuUb2

Media Matters’ Parker Molloy was kind enough to provide a sarcastic-clap Pelosi with a transparent background, to assist her fellow Twitter users in their quest to meme it. People were quick to utilize the doctored image.

Pelosi’s perfect cocktail of respect and utter disdain won the evening, providing everyone with the perfect meme template to remember the night.

It may be the greatest takeaway from the 2019 State of the Union.