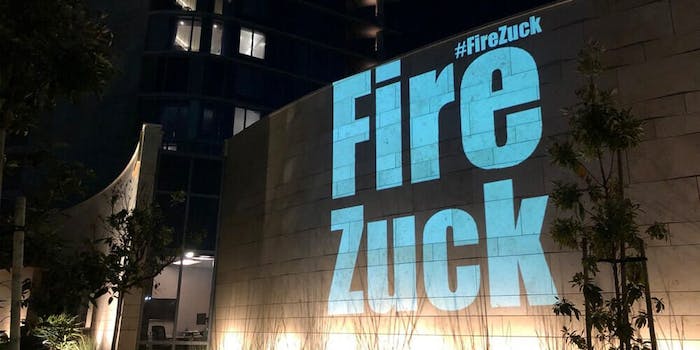 The site of Facebook’s annual shareholders’ meeting was met with a massive projection protest Wednesday evening, calling for company CEO Mark Zuckerberg to be fired.

One of the projections featured Zuckerberg’s face, along with the words, “Fire Mark Zuckerberg,” another read “Fire Zuck.” The projections were seen on the Hotel Nia in Palo Alto, California, where the meeting was taking place.

It was organized by the digital rights organization “Fight for the Future,” as part of the group’s effort to bring awareness to the numerous privacy scandals Facebook has seen with Zuckerberg at the helm.

We’re projecting #FireZuck onto Hotel Nia right now, where @facebook will hold their shareholder meeting in the morning. It's the one day a year where Zuckerberg has to answer q's from shareholders.

But we know he won’t listen, b/c he holds 58% voting control in the company. pic.twitter.com/iUOw5OJRxf

In a Medium post, Fight for the Future argued that the social media site has violated the basic rights of billions of people by harvesting and misusing their personal data.

“Zuckerberg has been the sole leader of Facebook for its entire 15 years of existence,” the post reads. “In that time, there has been no attempt to move away from a business model reliant on violating user privacy. Facebook’s current business practices are fundamentally at odds with democracy and human rights.”

Facebook’s shareholders have repeatedly expressed their displeasure with the company founder by introducing proposals to have him removed. With Zuckerberg in control of the majority of voting shares, such attempts have never come to fruition.

Alex Stamos, Facebook’s former chief security officer, also backed calls for Zuckerberg to step down as CEO during an interview with Recode earlier this month. Facebook co-founder Chris Hughes also weighed in on the issue this month by calling on Facebook to be broken up.

Despite the growing backlash, a proposal to limit Zuckerberg’s control over the company on Thursday morning failed to pass. The Thursday meeting, however, was met with even more protesters. Advocacy groups SumOfUs and Bend the Arc stood outside with a large inflatable angry emoji face while the conservative group Take California Back accused the company of censorship through a bullhorn.

Today we attended the @facebook shareholder meeting to demand an end to hate speech on Facebook and break up the Facebook/Instagram/WhatsApp monopoly.

As both the CEO & the chair of the board, Zuckerberg is his own boss, operating with essentially no oversight. pic.twitter.com/kFY4tRd7vO

Fight for the Future’s campaign, which was officially launched earlier this month, also includes a petition urging the Facebook founder to resign.

“There is no single silver bullet solution that will ‘fix’ Facebook,” the petition states. “But we can start by sending a clear message to its shareholders, corporate leadership, and the entire tech industry that we are fed up, and that no one should be immune from facing the consequences of their actions.”

In an op-ed for the Guardian this month, Evan Greer, Fight for the Future’s deputy director, reiterated Facebook’s troubled history by citing 25 of the company’s most prominent scandals.

Just this year alone, Facebook has been at the center of many privacy scandals. In March, it was discovered that Facebook left hundreds of millions of user passwords unencrypted on company servers. It also demanded some users give up the passwords to their personal email accounts.