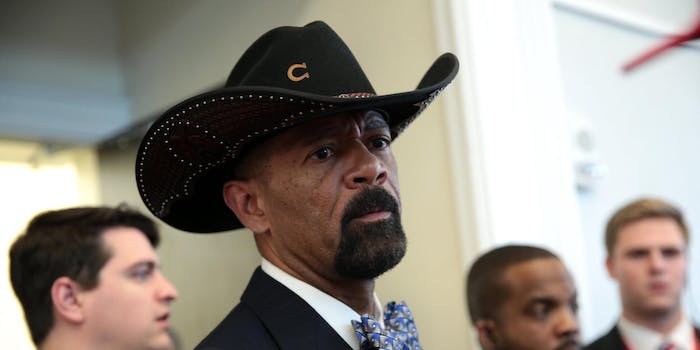 Some of his tweets are no longer on the site.

David Clarke Jr., the controversial former Milwaukee County sheriff, claimed in a now-removed tweet that the coronavirus was an “attempt to destroy capitalism” and is telling his followers to defy recommendations to stop gathering in public places.

Clarke, who was once reportedly considered by President Donald Trump to have a post in the Department of Homeland Security, went on a tweetstorm on Sunday night about the virus.

In one tweet, which has been removed from Twitter for violating its rules, the former sheriff said (according to Raw Story): “it is now evident that this is an orchestrated attempt to destroy CAPITALISM. First sports, then schools and finally commercial businesses. Time to RISE UP and push back. Bars and restaurants should defy the order. Let people decide if they want to go out.”

He continued, in a series of tweets, to tell people to continue going to public places like bars, restaurants, malls, and churches as a way to “end government control of our lives.”

The Centers for Disease Control (CDC) on Sunday recommended that gatherings of 50 people or more should be avoided for the next eight weeks.

Clarke also then tried to implicate billionaire Democratic donor George Soros in the spread of the panic that has set in the wake of the coronavirus.

“Not ONE media outlet has asked about George Soros’s involvement in this FLU panic. He is SOMEWHERE involved in this,” Clarke tweeted.