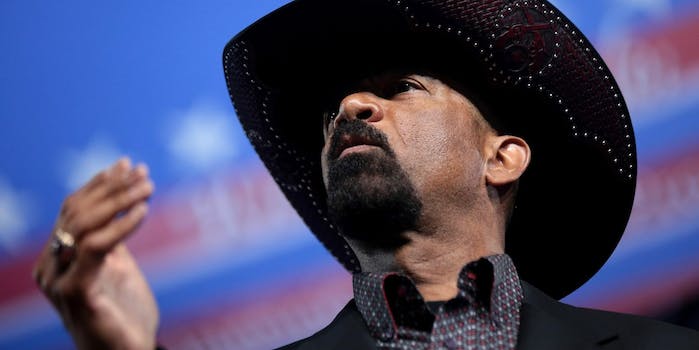 ‘I will continue to poke them in the eye with a sharp stick.’

David Clarke, the controversial former sheriff of Milwaukee, said Saturday he wants to make the media bleed after reports surfaced that the FBI had investigated his emails.

The investigation related to an incident from January when he had a verbal exchange with a fellow airline passenger that allegedly caused Clarke to contact fellow police officers and command them to question the passenger after he stepped off the plane. The FBI reportedly was investigating any potential civil rights violations that occurred during that incident after the passenger, Dan Black, sued for what he said was the violation of his constitutional rights.

Though prosecutors eventually declined to file criminal charges, the news that Clarke’s emails had been under surveillance surfaced last week. And that led Clarke—who has faced controversy for his threats of violence and the four deaths that occurred in his jail in 2016—to go on a social media rant.

I am UNINTIMIDATED by lib media attempts to smear and discredit me with their FAKE NEWS reports designed to silence me. I will continue to poke them in the eye with a sharp stick and bitch slap these scum bags til they get it. I have been attacked by better people than them #MAGA pic.twitter.com/XtZW5PdU2b

LYING LIB MEDIA can’t beat me with a coherent counter argument so they resort to what liberals do when they have no logical narrative. They try to silence me by creating FAKE NEWS from LIES to smear me like they did yesterday. I don’t back down, I punch back. Bring it scum bags pic.twitter.com/rpyHCb0659

Nothing like getting under the skin of lefties like I did today. I fight to win. You come at me libs you better bring a hard hat, some aspirin and your veggie wrap because it’s going to be a long day and I’m going to smack you around until you crawl back to your mom’s basement. pic.twitter.com/CgmrRiBp8Y

In a statement to Law & Crime, Clarke said he was not under FBI investigation, and it doesn’t appear that any media outlet reported that he was still being investigated. Clarke resigned as sheriff in August.