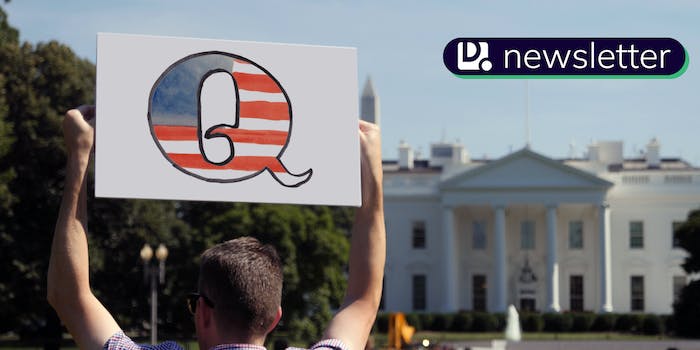 Newsletter: Here’s the next Q candidate you need to know

Today’s newsletter’s got news from all across the internet including: Proud Boys leaders being charged, an explainer about the Bechdel Test tweets you’ve probably seen on your timeline, and a recap of the latest episode of Obi-Wan Kenobi.

After that, we’ve got a “Dirty Delete” column from our Politics Reporter Claire.

Let’s get into it!

FAR-RIGHT: Federal prosecutors charged Henry “Enrique” Tarrio and other leaders of the far-right Proud Boys with seditious conspiracy over the Capitol Riot. They are already facing multiple charges associated with the failed attempt to overturn the 2020 election results in favor of Donald Trump. Check out our full report on the latest charges here.

BECHDEL TEST: Yesterday, our Culture Reporter Michelle wrote about how a tweet panning Fire Island, a new film streaming on Hulu, and how it got an “F-minus on the Bechdel test” drummed up a ton of criticism online. Well, now we’ve got a whole explainer on the controversy, which has exploded online. Check out everything you need to know about it here.

REVIEW: Obi-Wan Kenobi, the new Star Wars series on Disney+ “continues to improve week by week,” our Culture Reporter Gavia notes in her recap of episode 4. The series, she writes, has become an “engaging action/adventure thriller.” You can read her whole recap (which has spoilers for the latest episode) here.

Jo Rae Perkins has spent the last decade running for federal office. After four failed attempts at winning higher office, this year, the Oregon Republican is hoping that far-right beliefs and conspiracy theories will finally carry her into the United States Senate.

Perkins was an early adopter of QAnon, the conspiracy theory that Satan-worshiping, child-sacrificing pedophiles run the world and former President Donald Trump was in a secret war against them.

The perennial candidate for federal office has posted QAnon theories and slogans for years. On a livestream in 2020, she said of the supposed government insider who gave rise to QAnon, “[There’s a] very strong probability/possibility that ‘Q’ is a real group of people, military intelligence, working with President Trump.”

Perkins’ far-right politics include supporting forced birth for rape victims, defending the Proud Boys, attending the protest that became the Capitol riot, then blaming it on antifascists. In a strange logical contortion, earlier this week, she referred to accused Capitol rioters as “patriots” who were merely “exercising their and your 1st Amendment rights.”

That didn’t stop Oregon Republicans from voting for her, however. Perkins won the primary last month. She faces Sen. Ron Wyden (D-Ore.) in November.

Online, you can find Perkins on Twitter, Facebook, Instagram, Rumble, YouTube, and Truth Social. There she posts about “magnetic vaccines,” claims carbon dioxide doesn’t cause global warming, and lies about widespread fraud in the 2020 presidential election.

Perkins’ web footprint also includes accusing Jack Dorsey of being part of the “deep state” and the Chinese Communist Party and dancing on Supreme Court Justice Ruth Bader Ginsburg’s grave the day she died. “Dead age 87! Another Supreme Court nomination for President Trump,” she wrote, adding with the utmost sincerity “no offense intended.”

Days after Jeffrey Epstein died, she posted a photo of him being carted out of jail on a stretcher and zoomed-in pictures of his ear. The photos prompted her followers to opine that the man on the stretcher wasn’t Epstein, but Anthony Bourdain, who died a year earlier.

Should Perkins win a Senate seat, the oath of office won’t be the first she’s taken. She previously tweeted a video of herself taking the “oath” as a “digital soldier” for Q. One can only imagine this means she’d follow the lead of fellow QAnon followers in Congress.

She’s somewhat cooled off on making overt references to QAnon and its various slogans in recent months, but still promotes even some of its wackier theories.

In April, she posted a link to a video that claimed COVID was caused by snake venom in the water supply.

As she once said of QAnon, “It’s either pure genius or pure insanity.”

🏋️ A woman shared an easy way to use an iPhone hack to catch creeps at the gym in the act.

💰 A woman went viral after showing what a high-priced apartment in New York looks like in 2022. Spoiler alert: It’s not great.

🛠️ A Home Depot customer took to TikTok to detail how she had a misogynistic exchange with a supervisor while returning a pressure washer.

🏳️‍🌈 Whether you want to laugh, cry, or celebrate Pride, these LGBTQ movies on Netflix are just what you need. *

🍗 While Chick-fil-A isn’t joining other corporations in showing nominal support for Pride Month, that hasn’t stopped some employees for showing support in unusual ways.

🥝 TikToker and model Challan discusses cosplay, social media fame, and the Crib Around the Corner. Sign up for Passionfruit, the Daily Dot’s weekly creator economy newsletter, for more coverage.

💊 A supplement industry worker revealed fake phrases that companies make up to advertise their products in a viral video.

📦 A video has gone viral showing two UPS drivers running into each other at the same home, sparking a debate about management.

A video has gone viral that shows a woman being manhandled by staff while escorted out of a Los Angeles Dodgers game for dancing in front of the crowd. In the overlay text, the user says the woman was “obviously drunk” and her breast fell out of her shirt “multiple times” that caused Karens to complain about her.

Now Playing: 🎶“Thats What I Want” by Lil Nas X🎶