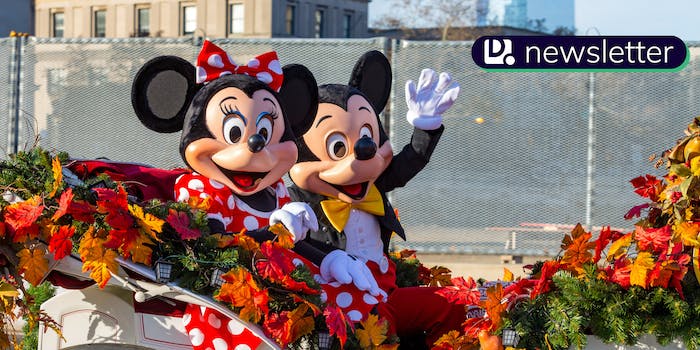 Today’s newsletter includes reports about discourse on BookTwitter, reactions to a pretty wild post on r/AmITheAsshole, and yet another follow up on Rep. Barry Loudermilk and the 2020 election (summer of scoops alert!)

After that, our Culture Reporter Michelle breaks down some online chatter about Fire Island in our weekly “Now Streaming” column.

BOOKTOK: A discussion about the ethics of returning ebooks has reemerged online, with authors highlighting how TikTok was one of the reasons behind an upsurge in people returning ebooks on Amazon, but actually readying the whole thing first. The problem? Authors are charged a fee to have the book restocked.

DISNEY WEDDING: A post on the r/AmITheAsshole community on Reddit has gone viral after they said they didn’t provide catering at their wedding and instead opted to use the money to have Mickey and Minnie appear at their reception. As you can probably guess, the post garnered a ton of responses. Our Culture Reporter Michelle breaks it down here.

CONSPIRACY: According to a recorded call between a conspiratorial Georgia lobbyist and her supporters, Rep. Barry Loudermilk (R-Ga.) called former Rep. Devin Nunes (R-Calif.) on her behalf, shortly before she delivered documents to Nunes’ staff falsely stating that Italian satellites helped elect President Joe Biden. The use of “Italian satellites” was a common conspiracy theory among Trump supporters after the 2020 election.

It is a truth universally acknowledged that the Jane Austen adaptive industrial complex is a beast unto itself.

You have your more traditional adaptations (the 1995 Pride and Prejudice BBC miniseries and the 2005 Joe Wright film, Ang Lee’s Sense and Sensibility, Autumn de Wilde’s Emma, Netflix’s upcoming Persuasion film from Carrie Cracknell). There is the modern spin (Clueless, Bridget Jones’ Diary). Some adaptations take more inventive turns (The Lizzie Bennet Diaries), while others use Austen’s story as a launching-off point by necessity (PBS’s Sanditon). And then there are way too many books to name that use the plots or characters of Austen’s novels as the basis.

So the results can sometimes be a mixed bag before you loop in the eternal arguments about which adaptation reigns supreme or debate your favorite Darcy on Twitter.

It might be a good movie, but is it also a good Austen adaptation? And if it’s a successful Austen adaptation, it doesn’t always guarantee the film itself is good. Fortunately, Fire Island, the gay, modern spin on Pride and Prejudice with Asian-Americans front and center,from writer-star Joel Kim Booster and director Andrew Ahn, is one of those instances where it’s not just a great movie, it’s also a great Austen adaptation. (It’s streaming on Hulu.)

In interviews, Booster said he noticed just how succinctly the class structure ingrained in Pride and Prejudice’s Regency England and the story itself mapped out onto his experience visiting Fire Island as a gay Asian-American man. And even if you’re unfamiliar with Fire Island itself, it’s easy to see where the parallels come in. Instead of the five Bennet sisters, Fire Island centers on a found family experiencing what might be their final pilgrimage to Fire Island Pines—a hotspot just off the South Shore of New York’s Long Island that’s been a haven for gay men for decades—after Erin (Margaret Cho), the defacto lesbian mom of the group, is forced to sell her home. Noah (Booster) is determined to help his best friend Howie (SNL’s Bowen Yang) get laid. That brings them into the orbit of Charlie (James Scully), his much wealthier group of friends who find ways to judge Noah and Howie’s group at every turn, and his best friend Will (Conrad Ricamora), with whom Noah instantly clashes.

The film doesn’t stray too far from the Pride and Prejudice we know, but Booster finds clever ways to nod, pay homage to, and even subvert some of the expected tropes woven into the story and the larger rom-com genre. (There’s even a Darcy letter!)

The film has garnered plenty of praise since its debut on June 3, a response that Booster said left him “completely and utterly overwhelmed.” But in the past day, a tweet from New York Magazine’s Hanna Rosin panning Fire Island dominated chatter about the film after she gave the film an “F-minus on the Bechdel test” and asked if people are ignoring “the drab lesbian stereotypes bc cute gay Asian boys?” Her tweet, which she eventually deleted and apologized for being offensive, was immediately ratioed to nearly 2,000 quote-retweets.

The Bechdel test, which asks if a film features two female characters who have a conversation about something other than a man, is often seen as a benchmark when it comes to female representation. In reality, it’s really closer to being a bar nailed to the ground that a lot of major films still trip over.

But the Bechdel test isn’t an end-all/be-all when it comes to representation: As Decider noted back in April after the release of Netflix’s 365: This Day, some truly misogynistic garbage can still pass the test.

As people took Rosin to task for what was deemed to be peak white feminism, they argued that she used emasculating language to describe the film’s stars and pointed out that she was applying the Bechdel test in bad faith, particularly when it was a film centered around Asian gay men. (“How come this film about Asian gay men (a group never centered in a mainstream movie before) is not also about MEEEE?!?” one person replied in a summation of Rosin’s response.)

Find your rainbow with TomboyX

Pride Month is the perfect time to find underwear that lets you define yourself—for yourself because fitting in was never the point. The TomboyXRainbow Collection features rainbow gender-neutral and size-inclusive underwear, socks, and apparel for everyone in every size. Shop the queer-owned brand today, and show your pride all year long.

📷 A mom reached her wit’s end in a neighborly dispute and shared it on TikTok. After multiple attempts, she’s been unable to block her neighbor’s Ring camera from peering onto her property.

🤡 An anti-choice TikTok creator is getting clowned online after she said she would adopt a baby to “spare” a woman from the “trauma of abortion.”

💵 In a viral video, a convenience store worker shared a story of how they were allegedly harassed by a customer over…. sales tax.

🚗 Well, this is certainly a dating nightmare. A woman has gone viral after sharing how her date brought her to CarMax on a date.

⚱️ A Texas woman was reportedly charged with abuse of a corpse after throwing he boyfriend’s mother’s ashes into a lake after finding out he allegedly cheated on her.

🥝 Salary Transparent Street is having frank conversations about wages on TikTok. Sign up for Passionfruit, the Daily Dot’s weekly creator economy newsletter, for more coverage.

📱 A TikToker is under fire after posting a “tax-hack” video where she said U.S. citizens could avoid paying taxes by moving to Puerto Rico. Among the comments: “This feels problematic.”

🔍 To mark the fourth anniversary of the first QAnon drop on 4chan, the Daily Dot tells stories about Q that haven’t been looked at.

A TikToker went viral after they pointed out the difference between Target’s Pride product collections in different states. The user compared the collections in stores in California and Pennsylvania.