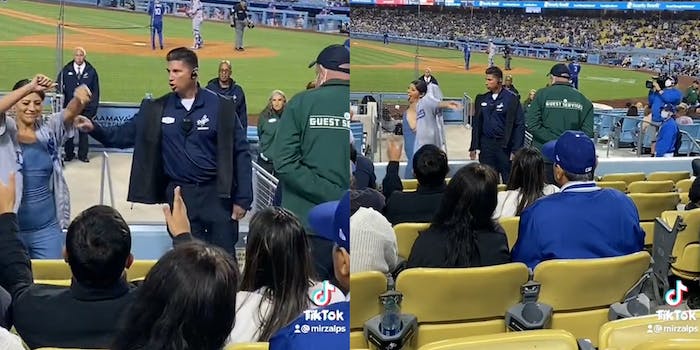 ‘The lady is pretty so Karens start complaining’: Woman allegedly gets escorted out of baseball game after dancing in front of crowd, having accidental nip slip

'It's a baseball game not a funeral.'

A TikTok video featuring a woman being escorted out of a Los Angeles Dodgers game for dancing in front of the crowd has gone viral on the video-sharing platform. The clip, posted on June 5 by @mirzalps, shows stadium officials manhandling the woman, attempting to force her out of the venue.

The original video went viral, accruing nearly 200,000 views and sparking debate in the comments. After commenters asked Mirza for a storytime, she posted a follow-up video on June 6, which has garnered over 1.2 million views.

In the overlay text, Mirza explains, “She was obviously drunk.” She writes that the woman’s breast reportedly fell out of her dress multiple times, causing nearby Karens to complain, allegedly prompting her removal from the venue.

Mirza continues, “She wasn’t [bothering] anybody.”

Commenters were quick to point out a sexist double standard. One user wrote, seemingly referencing a brawl at Dodgers Stadium in May, “When you get in trouble for celebrating at a baseball game but it is appropriate to start fights over scoring?”

Another commenter said, “It’s a baseball game not a funeral.”

Someone who allegedly was there even wrote, “Omg I was there. She got kicked out and arrested.”

Other commenters noted the woman was obstructing the view of the game with her dance moves: “It’s cool and all if we were at a concert. I’d be annoyed if I paid money for [a] baseball game but can’t see the field cus someone is dancing around.”

The Daily Dot has reached out to the Los Angeles Dodgers via press email and @mirzalps via TikTok comment for comment on this story but was not met with an immediate response.