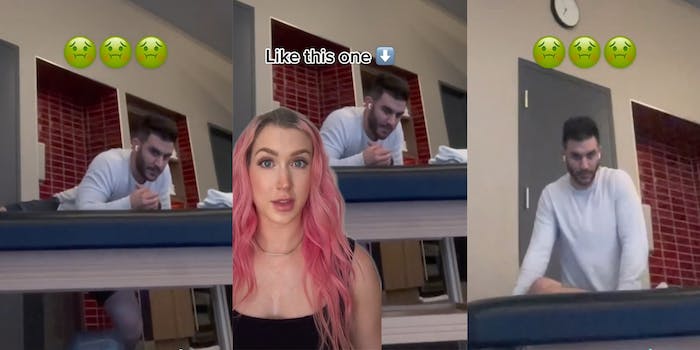 ‘If you ever have that feeling that there’s a creeper staring at you’: Woman shares iPhone hack to expose gym creeps

'Enjoy some bonus footage of the gym creeper I caught by using this method.'

In a viral TikTok, a woman shares an iPhone hack to catch gym creepers in the act. Emily (@emilywithanimals) posted the clip on May 26 with the caption: “This video is probably going to upset some men lol.”

In the clip, she shows a recording of a guy at the gym creepily watching her. “So if you ever have that feeling that there’s a creeper staring at you, but you don’t want to actually look at them and risk making eye contact, I’ve got a trick for you,” she says.

The clip switches to a ‘demo’ featuring her husband. At first, you just see her husband’s feet at a weight bench. “Point your camera down low and just pretend you’re texting—totally not suspicious. Without moving your phone, switch to wide angle and now you’re able to see their face and whether or not they’re staring at you,” she says. The camera lens switches to wide angle and you can see her husband’s entire body.

To do this, you have to “zoom out! Regular says 1x at the bottom. Switch it to .5x or .6x,” Emily wrote in the comments. However, this feature is only available on iPhone 11 and subsequent models.

“Now please enjoy some bonus footage of the gym creeper I caught by using this method,” she says. The clip goes back to the creeper from the first shot.

Commenters said it was “GENIUS.”

Some viewers were upset at how the patriarchy makes women feel unsafe and uncomfortable, even at the gym.

“The amount of work that is being a woman ugh!! We gotta have all the tricks and skills to protect ourselves from dying!” one user said in frustration.

“My gym solves this by having an entire extra, blocked of, gym only for women. It’s sad that it’s needed,” another wrote.

Other people said they’d rather confront the creeper or do something more obvious.

“Nope- I’m looking them right into their soul. I’ll make them more uncomfortable,” one claimed.

“Nah imma pull out my cam, turn on the flash and let him know,” another person commented.

Some argued that there’s nothing wrong with staring. “Wait, why is looking at someone bad now?”

To which someone replied, “You don’t see anything wrong with staring at someone for so long to the point that they’re uncomfortable? Really?”

Unfortunately, it seems like some men miss the fact that many women end up feeling uncomfortable at the gym by men staring or approaching them when they’re just trying to workout.

The Daily Dot has reached out to Emily via Instagram direct message and email.