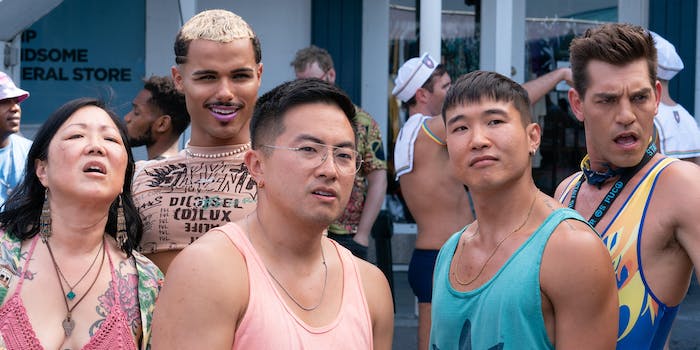 ‘Is this revenge for all those years of the gay boy best friend?’: The ‘Fire Island’ Bechdel Test controversy, explained

After someone criticized the queer romcom 'Fire Island' for failing the Bechdel Test, all hell broke loose.

Earning largely positive reviews, the new Hulu romcom Fire Island offers a queer Asian-American twist on the classic tale of Pride and Prejudice. But alongside all the praise, it also inspired a legendarily controversial hot take this week on Twitter, kicking off a fresh round of discourse about the Bechdel Test.

We begin with a now-deleted tweet from New York magazine podcast director Hanna Rosin, who critiqued the film for its lack of female characters. “So @hulu #FireIslandMovie gets an F- on the Bechdel test in a whole new way,” she wrote. “Do we just ignore the drab lesbian stereotypes bc cute gay Asian boys? Is this revenge for all those years of the gay boy best friend?”

This tweet was quickly ratio’d, attracting criticisms from multiple angles: The condescending undertones of describing Joel Kim Booster and Bowen Yang as “cute gay Asian boys,” the dubious framing of Margaret Cho as “drab,” and (of course!) the validity of judging this film using the Bechdel Test in the first place.

Originating in a 1985 comic strip from Alison Bechdel’s Dykes to Watch Out For, the so-called Bechdel Test critiques the male-dominated nature of Hollywood movies. In order to pass the test, a film must include two women who talk to each other about something other than a man.

On a macro level, this test is an effective tool to illustrate the limited roles for women in cinema. In the original comic, the idea is explained by a Black lesbian character, walking past a series of movie posters advertising macho action movies. But as the test became a mainstream buzzword, people began to treat it as a rigid law of media criticism, as if “passing the Bechdel test” is some kind of official feminist qualification. If anything, this leads people to be less thoughtful about gender roles in film.

In the case of Fire Island, Bechdel-centric criticism is particularly absurd because the movie is specifically about gay Asian-American men, an underrepresented demographic. So by complaining that Fire Island got an “F- grade,” Hanna Rosin came across as tone-deaf and clueless about the film’s purpose – and about the Bechdel Test itself.

After extensive backlash (and a flood of memes satirizing the idea of gay media getting an F- on the Bechdel Test), Rosin deleted the tweet and apologized, writing, “My tweet was careless and thoughtless. Truly. The movie was telling a story about queer AAPI men, whose experiences don’t show up enough in movies or anywhere else.”

Meanwhile, Alison Bechdel herself got the last laugh. “Okay, I just added a corollary to the Bechdel test,” she tweeted. “Two men talking to each other about the female protagonist of an Alice Munro story in a screenplay structured on a Jane Austen novel = pass.”