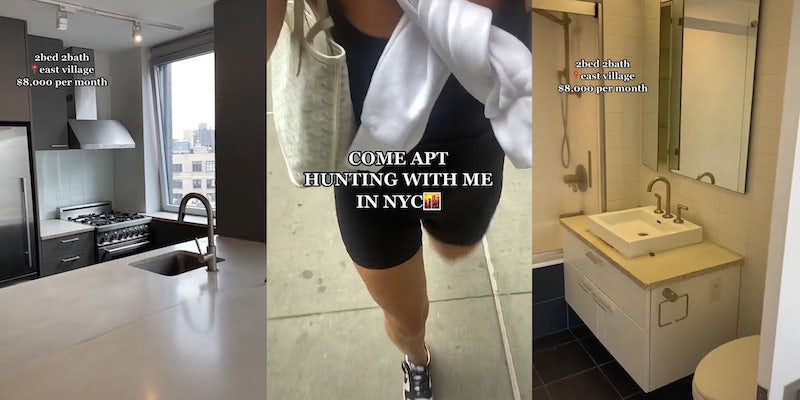 ‘Imagine spending 4K just to have a roommate’: Renter shows what $8,000 in rent will get New Yorkers, sparking debate

A TikToker went viral this week after showing what a high-priced apartment in New York looks like in 2022. Spoiler alert: It’s not great.

After posting the TikTok just four days ago, user Stephanie (@stephanieleighnyc) received over 5.6 million views, with many users questioning how prices in the city got so high, and how landlords can expect so much money for such a paltry offering.

“This market right now is insane,” Stephanie says in her TikTok. “I’ve never seen it like this, and this is my eighth time moving in New York.”

Over the course of the video, Stephanie explains she is moving to a new building after her landlord dramatically raised her rental price.

“Apparently, they can do that,” she says at the video’s start.

Because of this, she has embarked on several viewings throughout New York, with many reaching high price points for comparatively minimal offerings.

In this video, she shows one of the apartments in question. She says it’s a two-bedroom, two-bathroom apartment in the East Village listed at $8,000 per month.

While she notes that the apartment is “nice,” Stephanie points out that the price is “absurd,” noting the small closet space and outdated bathroom.

Later, she shows another apartment in the same building, this one listed at $12,000. While she attributes the high price to the apartment’s “big terrace,” she states that the space is “not worth it for $12,000.”

As to why she went to see the apartment at all, Stephanie claims she was deceived by the apartment’s listing.

“This is not at all what I saw,” she says in the video, referring to the apartment’s bathroom. “It has to be a completely different apartment.”

In fact, the images provided online seem dramatically different from what was shown in the original video, with many users in comments speculating that virtual staging was done in a way that makes viewers think the location is bigger than it actually is.

“I feel like I was punked,” Stephanie says in the video.

She also claims in this video that she thought she could negotiate the price down, not realizing that some people were offering “above asking” price.

In the comments section under the first video, users were shocked by both the high prices and the apartment itself.

“That’s like two house mortgage depending where you live,” another stated.

“How does NYC not have laws against this,” a third questioned.

Per Zillow, the asking price of this apartment is above average. Zillow claims that the median rental price for the East Village is currently $4,495. That said, rental prices are increasing at a dramatic pace, with the median rental cost up over 36% from the same time last year and 12% since January alone.

As for whether New York has rules about rental increases, the answer is split. For rent-stabilized apartments, which compose 50% of housing units in New York, rent can only be raised “in accordance with the rent guidelines issued by the Rent Guidelines Board or on a specific ground set forth in the Rent Stabilization Code,” a website run by the City of New York states.

Prices like these and lack of regulation may even drive Stephanie out of the city, along with dissuading many commenters from considering moving to New York.

As she said in the comments, “We’re considering [new] jersey at this point, still looking tho and hoping for the best.”

Update 7:55am CT, June 16: In an email, Stephanie Leigh told Daily Dot that she believes her apartment search is done.

“The apartment search hopefully is over as we are waiting to get approved by the condo board of an apartment we (my boyfriends and I) signed a lease with,” she explained.

Still, she was shocked by the conditions of the real estate market in the city.

“What surprised us the most is how aggressive the market is, not only with pricing but how quickly things are flying,” she shared. “People have been going above asking price and locking themselves into 2+ year leases just to secure the apartment.”