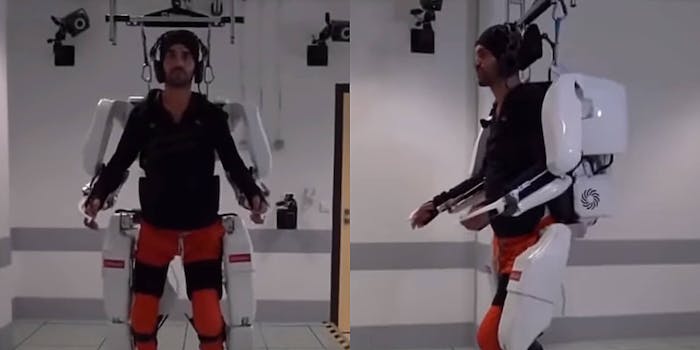 The technology remains experimental but promising.

A paralyzed French man has been able to walk thanks to a brain-controlled robotic exoskeleton.

The man, identified by AFP as Thibault, is a 28-year-old from Lyon, France who was paralyzed after a fall from a balcony severed his spinal cord four years ago. He retained some movement in his biceps and left wrist, and uses his left arm to operate the joystick on his wheelchair.

The exoskeleton was created by biomedical researchers from the University of Grenoble in France who published the findings of their two-year trial in The Lancet Neurology journal. The suit functions using two recording devices, inserted between Thibault’s skin and brain, that collect his brain signals and translate them into the movements he thinks about that the suit then acts out.

“When you’re in my position, when you can’t do anything with your body… I wanted to do something with my brain,” Thibault told AFP.

Researchers stressed that while the suit is still experimental, there’s promise it could improve the mobility of those suffering from tetraplegia.

“I can’t go home tomorrow in my exoskeleton, but I’ve got to a point where I can walk. I walk when I want and I stop when I want,” Thibault told AFP.

According to CNN, Thibault practiced for two years using a virtual avatar that helped him learn how to operate the exoskeleton through a video game-like computer program.

“Our findings could move us a step closer to helping tetraplegic patients to drive computers using brain signals alone, perhaps starting with driving wheelchairs using brain activity instead of joysticks and progressing to developing an exoskeleton for increased mobility,” Professor Stephan Chabardes,  author of the study, said in a press release.

According to CNN, the study has recruited three more patients for its study.