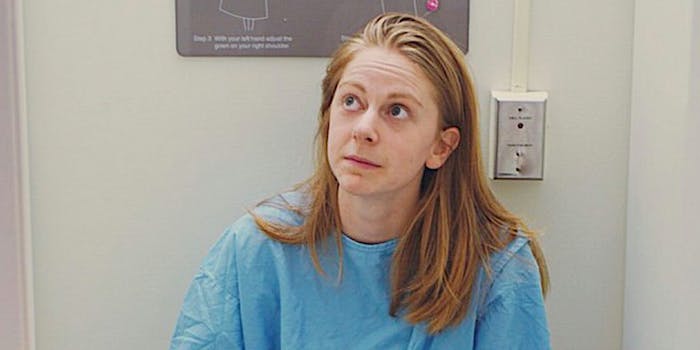 The 'queen of s****y robots' took fans on an intimate journey leading up to the procedure.

Simone Giertz, a YouTube star known for her accessible and funny science videos, is out of brain surgery to remove a benign tumor.

It went well enough that the 27-year-old apparently told a dirty joke upon waking up Thursday morning.

“Simone is out of surgery and her doctors are very pleased with how everything went. She woke up long enough to make an inappropriate joke… so things are looking good,” her Twitter wrote in an update to fans.

Known as the “queen of shitty YouTube,” Giertz invents infamously bad machines that rarely work but entertain and teach in their journey to being made. Why does someone need an alarm clock that slaps them in the face with a rubber hand? That’s not the point. True to form as a vlogger, Giertz was transparent and intimate about her health, chronicling proceedings via public-facing content.

“You’ve seen the title. You’ve clicked the video. You know what’s up,” she told her million-plus followers on April 30 in a clip titled “I have a brain tumor,” before adding: “The good news is that I’m probably not dying… but it’s pretty big, it’s the size of a golf ball.”

She named her tumor “Brian.”

“I’m going in to surgery in a week. This is your eviction notice, Brian the Brain Tumor. Please remove your property from my skull, eyeball and jaw muscle. I’m also keeping your security deposit,” she wrote last week on Twitter. She also made time to give a TED Talk that hit the internet this month.

But while the Swedish inventor took on the diagnosis with self-effacing zingers and an earnest, dry wit—”I have a lot on my brain right now” she tweeted on May 1—Giertz didn’t hide her fear and frustration:

What a crazy, unsolicited adventure all of this is pic.twitter.com/SNa8GoymNk

On Wednesday she posted a short video in a hospital gown.

“I’m feeling fine but I’m pretty scared but that’s also a healthy response to having your skull cut open,” she said. “I hope your day is more normal than mine. I’ll see you in a bit.”