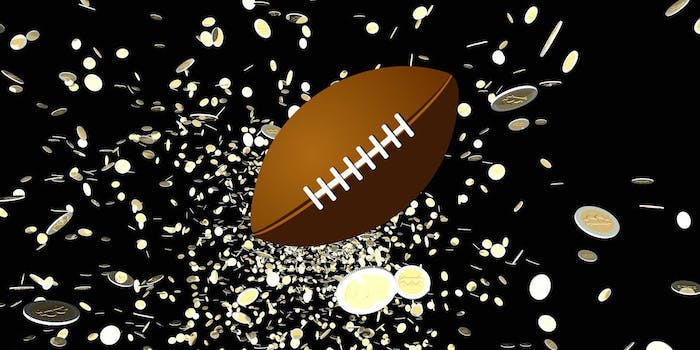 For BitPay, the three-year deal with ESPN Events to sponsor a bowl game is the start of a national conversation about Bitcoin.

A year that has already seen Bitcoin make its most significant inroads to the mainstream will end with the popular cryptocurrency attaching its name to a tradition that’s as American as apple pie: the college football bowl season.

We caught up with Stephanie Wargo, BitPay’s VP of marketing, to ask about how and why the company pursued this somewhat unlikely partnership with college football. Wargo said that BitPay drew inspiration from this guy.

This Bitcoin user appeared on ESPN’s College Gameday before a matchup between the Auburn Tigers and the Alabama Crimson Tide last December. The Bitcoin community apparently enjoyed his sign—they sent him more than $20,000 worth of bitcoins, at a time when the digital currency’s price was soaring.

Wargo said this happened at the same time BitPay was brainstorming ways to bring to the public “massive education on Bitcoin” to help people get “prepared for the massive [Bitcoin] adoption that’s going to take place.”

To Wargo and the rest of the BitPay team, college football seemed like a perfect match:

”College sports fit right in with our demographics. A lot of the kids are working on crypto, looking at crypto. There’s a very big crypto community on college campuses. Football in general fits our demographic—80 to 85 percent male, ages 17 to 54. It just lined up and it was a really good fit for us.”

Just about six months later, the company has arranged a situation where it will affix Bitcoin’s name to one of college football’s 39 bowl games.

“The reason it’s the Bitcoin Bowl and not the BitPay Bowl is because we want to be able to make this a complete Bitcoin ecosystem and really get the whole entire community involved in every aspect of the game,” Wargo said.

The way BitPay sees it going down is that people will be able to pay for everything, from tickets to hot dogs and sodas, with Bitcoin. Representatives from across the Bitcoin community will attend the game to evangelize the cryptocurrency to what will largely be a new audience, from setting up wallets to showing people how to make Bitcoin payments. The move is part of a larger shift within the Bitcoin community, one that’s less about the currency’s original libertarian ideals and more about providing a cheaper alternative to traditional credit systems.

“I want to get across how easy and secure using Bitcoin is,” Wargo said. “Just like you go through a Starbucks drive-thru right now, and you hand over your phone to do a payment, that you use your phone to do a [Bitcoin] payment, and it’s that simple.”

Making payments may be relatively simple, but not everything about Bitcoin is quite so copacetic. From its anonymous creator, Satoshi Nakamoto, to its connection to cybercrime, Bitcoin has developed a sometimes dubious reputation that it has struggled to shake.

Rather than avoiding it, Wargo said she foresees a situation where BitPay will embrace the sort of digital folklore surrounding Bitcoin when trying to introduce it to NCAA football fans.

“We definitely don’t want to discount how cryptocurrency and Bitcoin came to be,” Wargo said. “Where that fits, I’m not exactly sure at this moment. I do foresee it fitting in somewhere.”

While it’s arguably the most significant, this isn’t the first time a cryptocurrency has found a willing advertising partner in the sports world. Earlier this year, users of Dogecoin, a light-hearted alternative to Bitcoin, pooled their resources to sponsor NASCAR driver Josh Wise and get Dogecoin’s canine logo onto Wise’s no. 98 car.

Wargo said Dogecoin’s marketing success with NASCAR did not play into BitPay’s decision to pursue a college football bowl game, especially since the deal was in the works well before Dogecoin users adopted Wise into their offbeat and often joyous world.

That being said, Wargo said this won’t be the last time BitPay looks for advertising opportunities in sports, and the company does not intend to wait and see if the Bitcoin Bowl proves to be a successful venture.

Wargo would not disclose how much the company paid for the game’s naming rights. But if it is a success, BitPay has the option to extend the contract with the St. Petersburg Bowl for an additional three years.

In the 2013 version of the game, when it was still called the Beef ‘O’ Brady’s Bowl, the East Carolina University Pirates topped the Ohio University Bobcats by a score of 37-20. This year the team that wins the game will take home a $500,000 prize, and yes, it can choose to take the payment in Bitcoin.