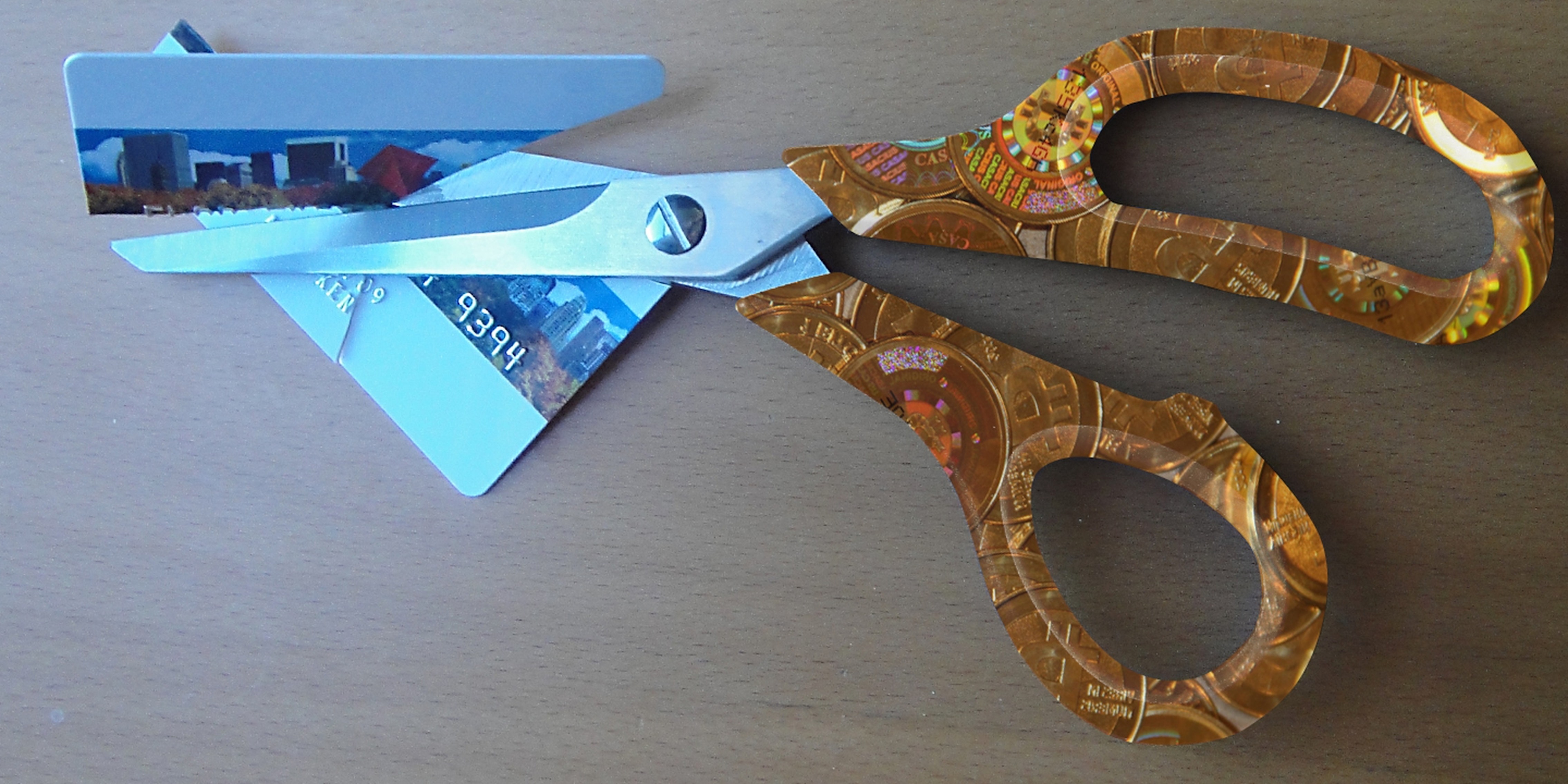 The battle for Bitcoin is over, and libertarians lost

To truly succeed, Bitcoin will shed everything that its early adopters loved, and it’s already happening.

If there was one message that people professionally in the Bitcoin business wanted to get across during the South by Southwest Interactive conference held earlier this month, it’s this: Bitcoin is not a currency, and anyone who thinks of it as such is missing out on its true potential.

Bitcoin, they argued, is primarily a payments mechanism—a way to transfer value from Point A to Point B in a way that’s simple, verifiable, and most importantly, extremely cheap. Yes, technically, Bitcoin also functions as a cryptocurrency, but its evangelists in Austin, Texas, seemed far less excited about the possibility of Bitcoin replacing the U.S. Dollar or the Chinese Yuan than they were about taking down Visa, MasterCard, or Western Union.

This attempt to reframe the debate is neither rhetorical nor an attempt to quell the fears of government regulators; instead, it’s part of a larger attempt to shed many of the potentially negative ideological and criminal associations that initially accompanied Bitcoin in the mind of the public at large in favor of comparatively neutral instrument of commerce.

That could be highly lucrative, especially considering that 76 percent of Americans (and beyond) have no idea what Bitcoin is. But the process has potential to also discard the very aspects of the currency that so many of its early adopters found so attractive in the first place. 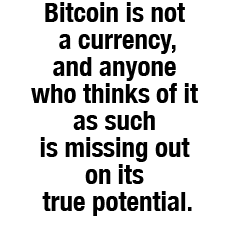 Liew explained that the first wave of Bitcoin users were radical libertarians and cryptography enthusiasts who liked the idea that Bitcoin doesn’t have a central authority with the ability to run the printing presses whenever it wanted, thereby theoretically devaluing the funds sitting in their bank accounts. This initial support got Bitcoin to a total market cap of about $50 million U.S. The second wave of adopters, who helped push Bitcoin over $5 billion mark, are people who largely appreciated Bitcoin for its pseudonymous nature. They could use Bitcoin to make online transactions without having to reveal their true identities, which made it an ideal vehicle for individuals engaged in illegal activities.

The third wave, Liew predicted, will be merchants sick and tired of giving Visa a 3 percent cut of every sale they make.

Speaking at another panel later in the festival, Fred Ehrsam, cofounder of the high-profile Bitcoin wallet service Coinbase, echoed Liew’s sentiments. ?Right now where Bitcoin adoption is kicking up now is with traditional tech early adopters—basically nerds,” he said.

Ehrsam pushed the idea that services like Coinbase could provide the infrastructure for making incredibly cheap transactions online. For example, let’s say you wanted to buy a $50 pair of jeans from an online retailer. Normally, you’d enter in your credit card information and the payment would be processed through the credit card company and its affiliated bank. In exchange for this service, the credit card company charges the retailer a fee of a few percent. On the other hand, you could take that $50, convert it into Bitcoin, and then send those bitcoins to the merchant, who would immediately convert it back into dollars. Ehrsam insisted that the combined cost of conducting both of those currency swaps, as well as the small tip required to transact through the Bitcoin network, is typically much smaller than what’s charged by the credit card companies.

The reason for this reduced fee is that much of what Visa and Mastercard require merchants to pay for—assuming the risk that the consumer will actually pay for the stuff he or she just purchased—is automatically handled by the Bitcoin protocol. The blockchain, a giant ledger containing the official record of every Bitcoin transaction ever conducted, essentially eliminates this problem because every computer connected to the network effectively knows the location of every Bitcoin in existence and can instantly check if the payment being sent is legitimate. Additionally, by buying and selling the bitcoins as close as possible to either side of the transaction, both parties eliminate the problem of extreme volatility in the price of Bitcoin that’s made many people skeptical about the currency. It doesn’t matter if the price of Bitcoin drops by $100 in the span of a few hours if you’re only actually holding the currency for a couple minutes at the most.

As a result, it’s easy to image merchants passing those savings on to consumers, who could, in turn, receive a discount on products purchased using Bitcoin. This discount wouldn’t come as a result of a merchant’s ideological or political desire to spread the gospel of Bitcoin, but rather as a simple business decision to gain a competitive advantage by cutting prices as costs decrease.

The call for transparency

It was after explaining where he sees Bitcoin’s coming role in the global financial system that Ehrsam made a comment likely to make some of the currency’s early, anti-government adopters’ heads explode. ?This is a good avenue for government regulation of Bitcoin,” he said. “If you’re moving bitcoins on behalf of others, it’s probably a good idea that somebody sees what you’re doing and [makes sure you] have reasonable security measures [in place].” 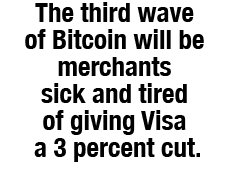 Constance Choi, general counsel for the San Francisco-based Bitcoin exchange Kraken, boasted that her company is working closely with government officials to proactively enact many of the best practices that will be likely be required by regulators at some point. The end goal of this regulatory accommodation seems less about fears of a looming government crackdown than convincing a skeptical public that financial institutions dealing in Bitcoin are really no different than those dealing in dollars and cents.

Choi told the Daily Dot that Kraken is licensed as a money transmitter in Europe and is in the process of getting licensed in the U.S. on a state-by-state basis. The company has also been subjecting itself to an independent, third-party audit of its financials. Kracken mandates all of its customers provide extensive documentation of their real-life identities—ranging from scans of driver’s licenses to bank account info—before they’re allowed to conduct trades on the company’s platform.

Even a recently as the beginning of 2013, when now-defunct organizations like Mt. Gox and the Silk Road were the biggest names in Bitcoin, requirements that Bitcoin users divulge this sort of information were few and far between. Now, they’re quickly becoming the norm.

In a conversation with Ehrsam, Wall Street Journal Technology Reporter Rolfe Winkler told a story that deftly illustrates how this new conception of how Bitcoin could be used can put it at odds with its original core of supporters.

While hanging around Austin a few days prior to the start of the festival, Winkler attended a meetup of Texas libertarians. He recounted being a little shocked when a handful of people walked in carrying semi-automatic rifles—Austin may be a liberal oasis, but it’s still in Texas after all. Winkler mentioned chatting with a group of middle-aged women who called themselves ?Moms for Bitcoin.”

?They saw Bitcoin as a tool to escape from the authority of the government. … [The other benefits of Bitcoin] were almost an afterthought to them,” Winkler said. ?[They want to] transact without being monitored. They use it as a way to get off the grid.”

These two conceptions of Bitcoin couldn’t be more different. On one hand, there are institutions like Kraken and Coinbase looking to do everything they can to connect Bitcoin into the traditional financial system, while ?Moms for Bitcoin” are using the currency in an attempt to actively withdraw from that very system.

The best indicator that the Krakens and Coinbases of the world are likely to see their visions vindicated came during a session near the tail-end of SXSW. Tucked into a small conference room in a hotel in downtown Austin, a few dozen people gathered for a meetup hosted by the Bitcoin-focused venture capital group BitAngels. 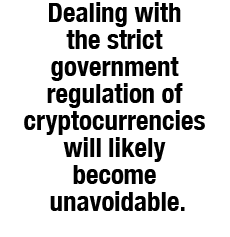 The session drew a lot of people working on startups in the cryptocurrency space or people from companies in the financial sector interested in taking the first cursory steps toward integrating Bitcoin into their businesses models.

Russell Castagnaro, for example, is the president of the Hawaii Information Consortium—a private firm that handles online payments and other Web services for Hawaii’s state government. He attended the meetup to judge the viability of letting Hawaii residents to eventually use Bitcoin to pay their taxes and other government fees. Castagnaro told the Daily Dot that Bitcoin has myriad advantages over other online payment methods:

Let’s say somebody wants to pay their taxes online using a credit card. If they have $1,000 liability they’re going to have to add that two percent on there because the state’s certainly not going to absorb it. [With credit cards] you also have the possibility of chargebacks, which can happen up to 90 days later—that’s a big risk . … It’s [also] a huge outlay just to do something like secure your systems. Using something like Bitcoin, that’s by definition secure. … It’s better than any payment method other than cash.

To even consider using Bitcoin for direct government payments, any company facilitating those payments is necessarily going to have to jump through just the sort of regulatory hoops many of the currency’s original boosters took up Bitcoin to specifically avoid.

The ecosystem of Bitcoin companies is adapting to a world where dealing with the strict government regulation of cryptocurrencies will likely become unavoidable. When one budding Bitcoin entrepreneur said he was planning on fighting government attempts to regulate his business under money transmitter laws, BitAngels cofounder David Johnson recommended partnering with an established institution to handle all of the financial back end, along with its attendant regulatory heavy lifting, while exclusively focusing on directly interfacing with customers.

Johnson also pointed to CoinComply, a company that helps Bitcoin startups deal with anti-money laundering rules, as an excellent resource for young organizations.

This sort of bottom line-minded thinking was pervasive during Bitcoin events throughout the conference, and it was striking for its lack of ideological furor. In stark contrast to the tenor of influential online forums like Reddit’s r/bitcoin community, there was virtually no railing against the Federal Reserve and there was barely a mention of government snooping on your financial activity.

If free-market libertarianism was spoken of at all, it was mentioned as a way to mark the distance between where Bitcoin started and where it’s ultimately going.