With Bitcoin smashing the $1,000 ceiling, is now the time to buy?

Bitcoin's price has grown five-fold in the past month.

On Wednesday, the price of Bitcoin climbed above $1000 as the unpredictable digital currency continued its month-long rise.

On the popular Japan-based exchange Mt Gox, the currency was for the first time in its history valued above the $1,000 mark. Since the beginning of November, bitcoin’s market value has increased five-fold.

Some have interpreted the rapid growth as an asset bubble that will inevitably correct itself at any moment. For others, it’s an indicator that the currency is finally gaining its footing in the marketplace. But what does the rapid growth mean for the average investor? Is now a good time to buy?

Those who think Bitcoin’s value increase is genuine point to the fact that there are a limited number of coins on the market. Right now there are about 12 million, which puts the market’s overall value at over $12 billion. More coins will be produced in the coming years, but only at a limited, predefined rate that will eventually stop. As supply decreases, conventional wisdom goes, demand, and thus price, should rise.

However, what makes this investment such a risky venture is that so little of it is actually spent in day-to-day transactions. Instead, more than half of all Bitcoins are held by speculators hoping that the price will continue to climb. Of the relatively small amount of coins actually changing hands, the majority is spent on gambling sites.

Because of this, Bitcoin occupies an interesting position. When one buys the coin, they are essentially just gambling that others will do the same. In other words, there isn’t much of an economy around the currency, beyond that of investors. As the Atlantic‘s Matthew O’Brien wrote, “Bitcoin is a Ponzi scheme libertarians use to make money off each other—because gold wasn’t enough of one for them.”

This may be changing however. For the time being, the currency seems to be gaining credibility among lawmakers and retailers alike. “It isn’t just the bitcoin community saying that bitcoin is used for good things and there’s a lot of great potential. We have members of Congress and government agencies who all agree,” Jinyoung Lee Englund, a spokesperson for the Bitcoin Foundation, told Reuters.

And on Black Friday, some 200 retailers will be offering discounts for those who use the cryptocurrency to do everything from donate to charity to purchase a ticket to space.

Of course, Bitcoin is only a few years old, and it’s had a rocky time of things so far. It’s mainstream reputation was somewhat damaged by the fact that it was the major currency used on used on controversial Internet black market Silk Road. And from the beginning, many economists have dismissed the entire notion of digital currency as a passing trend.

It’s easy to take the notion of a speculation bubble too far, however. When Bitcoin last boomed it quickly crashed, but a look at the long term trend suggest that overall the currency is increasing in value:

So should the average investor invest?

As Bitcoin continues to rise, the potential for a self-correcting crash looms large, particularly given its steep price tag and history of fluctuation. One worthwhile alternative to consider is Litecoin, the relatively new digital currency created in 2011.

Right now, Litecoin is much cheaper than Bitcoin, trading on November 28 for over $40. In the past few days it’s price has seen a similar rise to Bitcoin. 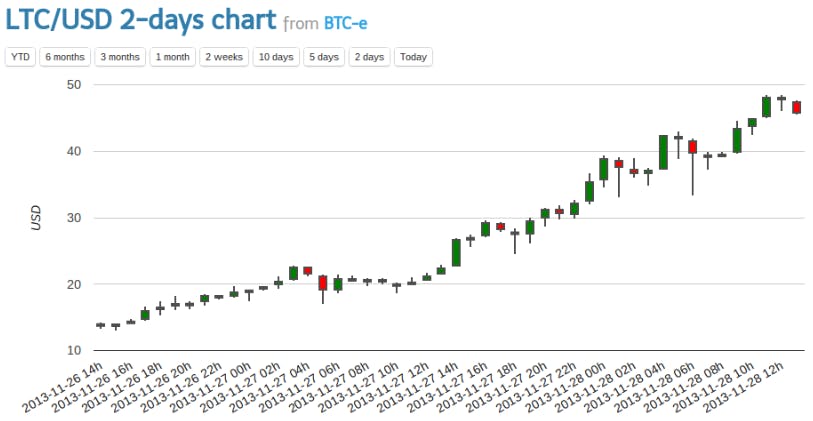 Also similar to Bitcoin, the rapid growth appears to have accelerated at the beginning of November: 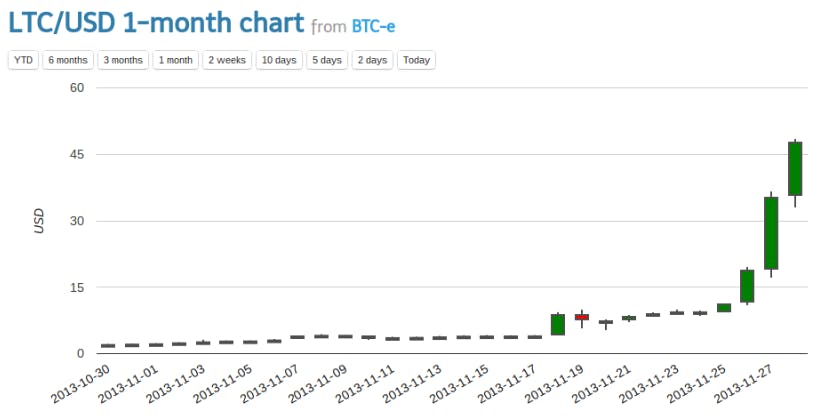 It’s possible, of course, that both currencies are doomed to fail. But right now, Litecoin is much less of a financial risk. And, for that matter, if it turns out that they don’t fail, Litecoin investors who get in now stand to have more to gain.

In any case, if acceptance by retailers is a major hurdle for these currencies, the holiday shopping season couldn’t have come at a better time. With Bitcoin prices soaring, and Black Friday retailers willing to give the cryptocurrency a chance, now may be just the time to buy.