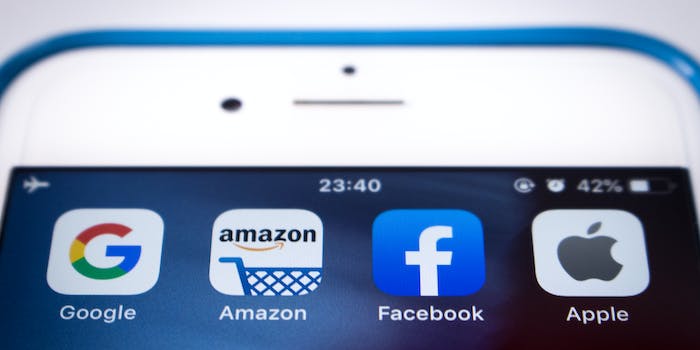 The bills would be a 'major step forward in restoring competitive markets,' the groups wrote.

A group of more than 50 organizations are urging leaders in the House of Representatives to pass a package of big tech antitrust bills that made their way through a committee earlier this summer.

The package of bills would be a “major step forward in restoring competitive markets and unlocking the potential of Americans to grow successful business and build an economy that is more prosperous, equitable, and innovative,” the groups said in a letter to House Speaker Nancy Pelosi (D-Calif.) and House Minority Leader Kevin McCarthy (R-Calif.).

In late June, the House Judiciary Committee approved six antitrust bills after a markup session that lasted 29 hours, as the Washington Post noted at the time.

All of them are aimed at big tech companies, like Apple, Google, Amazon, and Facebook, and include: the American Innovation and Choice Online Act, the Ending Platform Monopolies Act, the Platform Competition and Opportunity Act, the Augmenting Compatibility and Competition by Enabling Service Switching (ACCESS) Act, the Merger Filing Fee Modernization Act, and the State Antitrust Enforcement Venue Act.

“America has a monopoly problem,” the letter reads. “Monopoly power lowers wages, reduces innovation and entrepreneurship, exacerbates income and regional inequality, undermines the free press and access to information, and perpetuates toxic systems of racial, gender, and class dominance. Big Tech monopolies are at the center of many of these problems. Reining in these companies is an essential first step to reverse the damage of concentrated corporate power throughout our economy. The bills that passed out of the House Judiciary Committee, with bipartisan support, do just that and it is imperative that they move forward in the House.”

The letter was signed by 58 groups, including Public Citizen, Athena, the Electronic Frontier Foundation (EFF), Public Knowledge, and more.

Charlotte Slaiman, the competition policy director at Public Knowledge, said the number of groups that signed the letter showed “just how widespread the problem of big tech dominance is.”

“The House Judiciary Committee has charted a path forward with its bipartisan package to put people back in control of the digital economy,” Slaiman said in a statement. “The broad range of groups supporting this package shows just how widespread the problem of Big Tech dominance is, and that these bills deserve a full vote in the House imminently.”