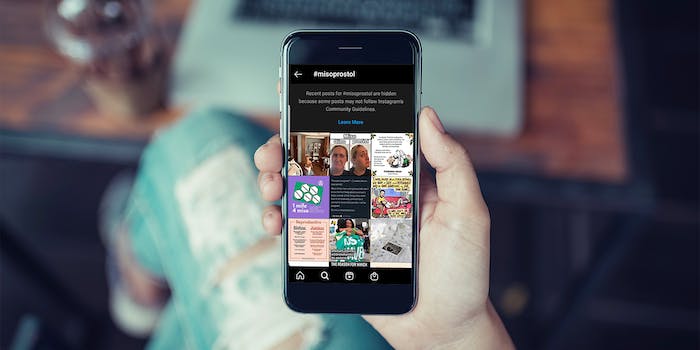 As a sweeping abortion ban went into effect in Texas today, people realized that Instagram and Facebook were hiding searches for the abortion pill. Activists believe that the move is related to the law.

Earlier this year, the Republican-dominated Texas legislature passed a law banning abortions after six weeks, when many women don’t know they’re pregnant. The law also allows anyone to sue a woman who obtains an abortion after this time period, as well as anyone who assists her in obtaining an abortion (including doctors and crisis counselors). It doesn’t have any exceptions for rape or incest.

Many believed that the United States Supreme Court would strike down the law, as it conflicts with Roe v. Wade, the landmark case that legalized abortion. Yesterday, the Supreme Court declined a request to block the law, allowing it to go into effect.

On Wednesday, social media was flooded with reactions to Texas’ abortion ban.

Searches for the terms on Wednesday brought up a notification that “recent” posts were hidden because some may not follow the sites’ community standards. It didn’t cite which guideline the posts violate.

Facebook, which owns Instagram, told the Daily Dot via email that the terms were blocked in error and that it predated the Texas law. As of this writing, Facebook had unblocked searches for misoprostol. Both hashtags remained blocked on Instagram, with the message about some posts being hidden.

Hayley McMahon, whose Twitter bio says she’s studying abortion at the Johns Hopkins Bloomberg School of Public Health, was among the first to notice that hashtags containing the drugs’ names are blocked.

McMahon tweeted that Plan C, an advocacy and research group that promotes access to abortion pills, was also suspended. Plan C’s account has since been restored. Facebook told the Daily Dot Plan C was suspended in error.

“I really can’t emphasize enough how critical social media is going to be for people who are looking for reliable information to self-manage their abortions with pills,” McMahon said.

She believes that suppressing this information increases the risk that women will try to terminate pregnancy with unsafe, unproven means.

“[I]f major social media platforms like Instagram are going to block this information and make it inaccessible, that very well could result in people turning to dangerous methods like using toxic herbs or manually inserting sharp objects,” she said.

McMahon also provided a screenshot of Instagram’s notification that it was removing her post for violating its guidelines. The post is a graphic that includes Plan C’s website is captioned “abortion pills by mail.”

In the early days of the pandemic, the Food and Drug Administration allowed women to be prescribed abortion pills via telehealth visits and to receive them by mail. The rule remains in effect.

A company representative told the Daily Dot that it is looking into why the terms are blocked on Instagram.

Update 4:00pm CT: An Instagram spokesperson said the hashtags are no longer blocked on the platform. The spokesperson said screenshots in this story show that the “hashtag is working” because no results would have populated when searching. The Daily Dot reviewed separate screenshots of no images populating before reaching out to Facebook.