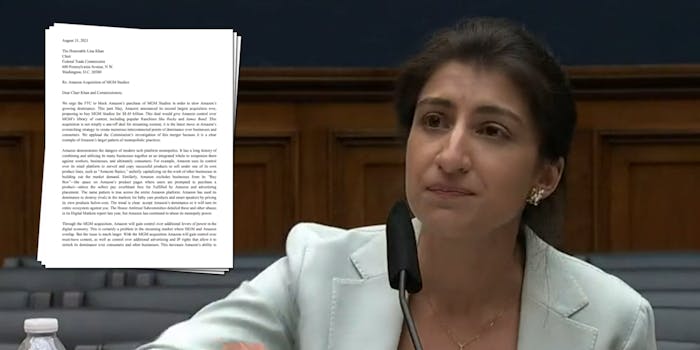 Amazon’s purchase of MGM Studios should be blocked to stop its ‘growing dominance,’ leading advocates say

The groups say the sale needs to be blocked to stop Amazon's 'growing dominance.'

In May, Amazon announced that it had reached a $8.45 billion deal to acquire MGM Studios, which produces popular franchises like the James Bond films. The FTC is reportedly investigating the proposed deal.

Shortly after the announcement, Amazon pushed for Khan—who has massive support from progressives and has been critical of big tech companies—to recuse herself from antitrust cases involving the retail giant.

Amazon claimed Khan, who wrote about Amazon and antitrust in a 2017 Yale Law Journal article, would not “be a neutral and impartial evaluator of the evidence developed in any antitrust investigation against Amazon.”

On Tuesday, the more than 30 advocacy groups—which include Demand Progress Education Fund, the Revolving Door Project, the Writers Guild of America West, the Working Families Party, MediaJustice, and others—said in a letter to Khan that the proposed MGM deal was “the latest move in Amazon’s overarching strategy to create numerous interconnected points of dominance over businesses and consumers.”

The letter notes that the deal could force consumers to subscribe to Amazon Prime because content would be exclusive to it, or that the retail giant could deny other streaming platforms access to its content. The letter also raises concerns over the “business and consumer data Amazon [would] acquire” in the proposed deal, which would “further entrench Amazon’s one-sided information advantage over other businesses that depend on its platform.”

“There is ample evidence already that Amazon uses the combined elements of its platform as a cudgel against its rivals,” the letter reads. “The proposed acquisition of MGM would give an already abusive monopoly even more weapons to use against consumers, businesses, and workers. We urge the FTC to halt this deal and to continue to investigate Amazon’s broad abuse of its ecosystem.”

David Segal, the executive director of the Demand Progress Education Fund, said the letter reflects a “broad political will” for there to be scrutiny over the proposed deal and Amazon in general.

“Amazon has a long history of leveraging its many lines of businesses as an integrated whole and weaponizing them against workers, businesses, and ultimately consumers. Through the MGM acquisition, Amazon would gain control over additional levers of power in the digital economy and beyond—and this letter makes it clear that there is broad political will for continued scrutiny of the firm, its acquisitions, and its business practices,” Segal said in a statement provided to the Daily Dot.