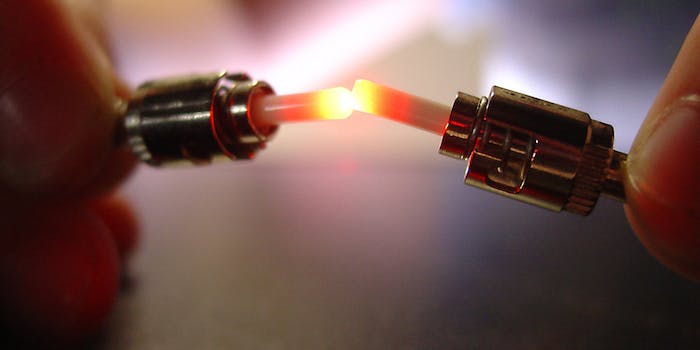 The possibility of strong net neutrality rules in the U.S. has AT&T pulling back on its high-speed Internet promises.

AT&T announced Wednesday that it would stop an infrastructure investment that would have brought faster broadband connections to a 100 U.S. cities, reports Reuters.

AT&T’s decision to “pause” its plans to deploy fiber connections around the U.S. follows a campaign by President Barack Obama urging the Federal Communications Commission (FCC) to adopt the strictest rules possible to protect net neutrality. Obama’s proposal, supporters say, would prevent broadband companies, such as AT&T, from intentionally slowing down Internet traffic or charging content providers more money for a “fast lane” to consumers.

Companies and industry groups who have their hearts set on increasing profits by charging online services such as Youtube and Netflix additional fees for prioritized high-speed traffic strongly protested Obama’s proposal.

“We can’t go out and invest that kind of money deploying fiber to 100 cities not knowing under what rules those investments will be governed,” AT&T Chief Executive Officer Randall Stephenson said Wednesday at an analyst conference.

Not all businesses agree with Stephenson, however. In May, 50 of the tech industry’s leading venture capital (VC) firms sent a letter to FCC Chairman Tom Wheeler asking him to reject plans to abandon the open Internet.

“If established companies are able to pay for better access speeds or lower latency, the Internet will no longer be a level playing field,” the VCs wrote. “Startups with applications that are advantaged by speed (such as games, video, or payment systems) will be unlikely to overcome that deficit no matter how innovative their service.”

AT&T’s plan to construct “ultra-fast fiber networks” in up to 100 cities was announced last April. It was unknown then whether broadband companies would be given free rein to prioritize Internet traffic, which makes AT&T’s sudden decision to cancel the project look more like a stunt. Inevitably, thanks to the free market principles its executives frequently tout, the company will either deploy its fiber network, or lose out to a competitor that will.

In other words, AT&T is basically throwing a giant corporate temper tantrum—playing “hardball,” if you prefer—in a last ditch effort to show just how much it really wants to make a lot of money by offering faster loading speeds to the highest bidders.

But AT&T’s decision to abruptly deny its customers (who netted the company $128 billion in revenue last year) improved broadband technology, which they already have readily available from competitors like Verizon and Google Fiber, illustrates just how disenfranchised the average consumer will be if the FCC decides to kill net neutrality.