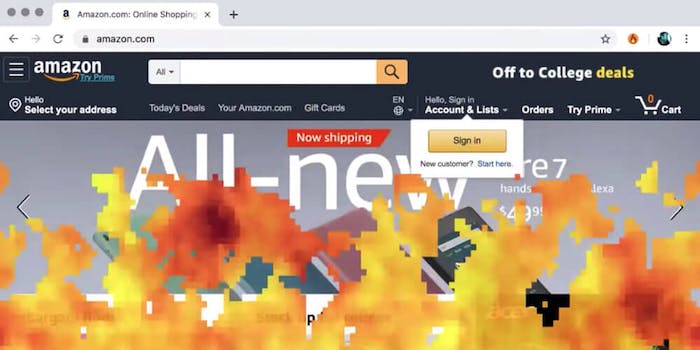 You can set Amazon.com on ‘fire’ for the Amazon rainforest fires

All you need is a Chrome extension.

A browser extension for Google Chrome will set Amazon.com ablaze to remind you of the only Amazon that matters right now–the Amazon rainforest.

Known as the “Amazon Is Burning,” the extension was made by two developers in response to the fires currently ravaging the Amazon rainforest in Brazil.

Jeff Bezos’ online empire has seen a surge in traffic recently as people search for information on the devastating fires and are instead presented with results for products such as the Amazon Fire Stick.

The extension is designed to engulf Amazon’s website in pixelated flames before asking you to donate to the Rainforest Trust, a nonprofit dedicated to preserving the actual Amazon.

“The world’s largest rainforest is currently being ravaged by fire,” the extension tells users. “Help save one of our most important natural resources by donating below and learning more about how you can impact the rainforest.”

The fires, which have been ongoing for nearly a month now, were allegedly started intentionally by farmers and ranchers to either clear land for crops and cattle or because they have political motivations. More than 2.5 million acres are estimated to have been burned thus far–and at a record rate. The rainforest produces 20% of the world’s oxygen and is instrumental in the fight against global warming. G-7 countries have since pledged $20 million–a number that has been mocked–in aid to Brazil in order to fight the flames.