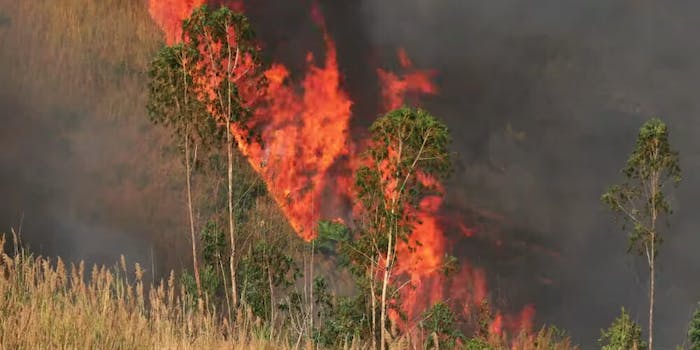 'Let the world know about it and demand action. This is not about Brazil, is about the planet.'

Fires have been ravaging the Amazon rainforest for three weeks and at a record rate, according to the National Institute for Space Research (INPE), which has been tracking Brazil’s fires since 2013. Many on social media are wondering why they are just now learning about it.

The Amazon produces 20% of the Earth’s oxygen and has been instrumental in slowing down global warming, according to CNN. Therefore, scientists are reportedly worried that the fires could accelerate global warming, hindering the fight against climate change.

“The amazon has been burning for 3 weeks. we are only now just finding out about it. billionaires aren’t doing anything. no one is doing anything. FUCK THIS WORLD FUCK THE POLITICIANS FUCK THE BILLIONAIRES, WE NEED TO SAVE OUR PLANET BEFORE WE RUN OUT OF TIME #AmazonRainforest,” Twitter user @IchbinGhani wrote.

After the city of São Paulo in Brazil–which is not, by any means, close to the Amazon–was engulfed in darkness due to smoke from the fires, residents began posting photos on Tumblr to raise awareness.

“So today the sky turned black at like 3 p.m. partly because of the smoke coming from the Amazon rainforest deforestation. This is what it looked like,” one Tumblr user posted, along with a photo, showing the city with dark clouds looming over it.

“Meanwhile our jackass president says the deforestation index done from freaking SPACE is lying about how much forest is gone,” they added.

Brazil’s far-right President Jair Bolsonaro has since accused environmental non-governmental organizations (NGOs) of setting the fires in order to “to bring problems to Brazil.” Bolsonaro’s environmental policies have long been controversial, and many are refuting his claim, instead accusing him of not doing enough to protect the precious world resource that is the Amazon.

“The government is hiding and lying about scientific data, saying that environmentalists and NGOs are communists trying to destroy the nation. They are brainwashing people to think that sustainability is terrible for the economy,” one Tumblr user wrote. “Please don’t let this go unseen. Search for yourself, talk to people about it, make noise, be angry and be scared. Let the world know about it and demand action. This is not about Brazil, is about the planet.”

Disappointed but not surprised.
This is the Brazilian environmental policy under president Bolsonaro. #PrayForTheAmazon #AmazonRainforest #AmazonFire https://t.co/qWR56ecuAd

Everybody should #boycottbrazil . Look where fruits, orange juice, coffee and beef you buy come from. Brasil also produces lots of soy & raw sugar. We need statements from food companies which of their products use Brazilian Ingrediens. We should ask for food labels

Catch this and dont laugh… Green NGOs are setting fire on #Amazonia says the president of the country.#fakepresident #bolsonaro #newworlddisorder https://t.co/Cd8YXoPmgq

#AmazonRainforest [UPDATE] The president* of Brasil’s response to the #AmazonFire is that NGO’s started the fires — Evidence shows the president* has been building up this fire since JANUARY. This was a CRIME, not an accident. pic.twitter.com/jZorawGmzV

The attacks on the Amazon are an international tragedy.

What can we do?

1. Support the courageous resistance of the indigenous peoples of the Amazon.

2. Make clear to the agribusiness & financiers involved in the destruction that we won’t buy their products. https://t.co/pDqH3ZI6X7

While Amazon fires do happen in the dry season, this year’s surge in fires is atypical. Some reports allege that farmers are setting fires to clear land for cattle ranching.

Many are comparing the public response and news coverage–or lack thereof–to that of the Notre Dame cathedral fire in Paris, France, which happened on April 15 and received an outpouring of support.

“Very interesting how billionaires and millionaires where the first ones to give money to a church in france but my country (which is the home of the biggest rain forest in the world and should be concerning everyone) is burning to the ground and i don’t see a penny or even a statement about it,” one Twitter user wrote.

Where are the billionaires now? Seems like the single Notre Dame building is far more important than, oh idk, Earth’s lungs. When you’re out of oxygen to breathe let’s see your god save you then. https://t.co/JLwecAiyS0

The efforts to raise awareness through social media seems to be working because #AmazonRainforest is trending on Twitter, and there has been a recent surge in media coverage.