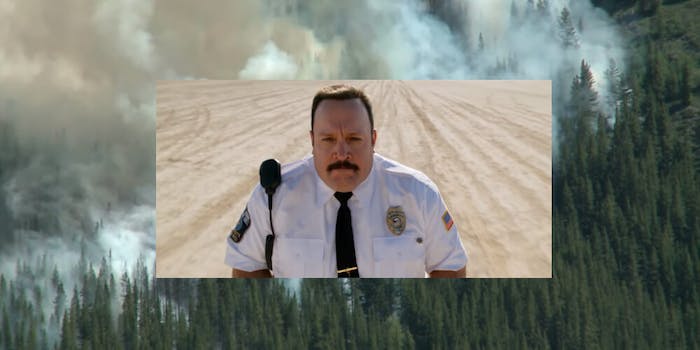 'A cartoon about the rainforest got more money than the actual rainforest.'

Parts of the Amazon are engulfed in flames—spelling trouble for the whole world, which receives 20% of its oxygen from the vast forest—but it seems like G7 countries aren’t too concerned by the news.

According to BBC News, international leaders of the seven nations that comprise the G7 organization–Canada, France, Germany, Italy, Japan, the U.K., and the U.S.–collectively pledged $22 million to help combat the fires.

Many on Twitter are comparing the minuscule dollar amount to the cost of making Hollywood movies–and it’s pretty depressing when you look at it that way.

“The movie Ferngully: The Last Rainforest had a budget of 24 Million Dollars.
A cartoon about the rainforest got more money than the actual rainforest,” one user noted.

The movie “Ferngully: The Last Rainforest” had a budget of 24 Million Dollars.
A cartoon about the rainforest got more money than the actual rainforest.

The seven richest countries managed to scrape together 1/5th the budget of a superhero movie to stop the destruction of the Amazon. *slow clap dot gif* https://t.co/W9vETsrKMl

The Amazon rainforest is on fire and the 7 richest countries have basically pledged the budget of a @ThatKevinSmith movie. pic.twitter.com/EMNBp5hf3Y

How about instead of @Marvel @DisneyStudios @SonyPictures or @wbpictures putting out a redundant, superhero movie, be real superheroes by donating an entire feature film budget (which is usually $100-$200 million) to help save the #AmazonForest #amazonrainforestfire

The National Institute for Space Research in Brazil reported that the number of rainforest fires has gone up from 40,000 to 72,000 this year alone, amidst growing political tension in Brazil over farming and deforestation. Brazil’s far-right President Jair Bolsonaro has been criticized for failing to take action against farmers who want to cultivate the land for farming and are allegedly setting the fires for political gain.

Regardless of the exact reason for the flames, the Amazon fires pose a serious threat to the whole planet. The approximately 390 billion trees in the forest are responsible for absorbing much of the CO2 in the atmosphere. With CO2 emissions at an all-time high, the Amazon is one of the biggest assets the planet has in the fight against climate change.

To combat the fires, actor and environmental activist Leonardo DiCaprio donated $5 million through his organization Earth Alliance. DiCaprio, along with two other philanthropists, started the non-governmental organization (NGO) back in July in an effort to protect the environment as well as indigenous people and their land. His power move has Twitter even more upset about the G7 countries’ apparent disregard for the Amazon.